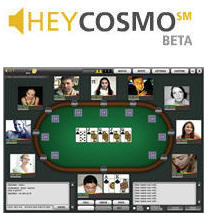 But Mountain View, Calif.’s HeyCosmo combines these elements, throws in live webcam streaming and ends up with something new.

The site makes it easy for groups of up to 10 people with webcams to see and engage each other around activities like playing fake-money Texas Hold ‘Em, watching videos, or sharing desktops or simple group chat. (see screenshot below)

When you first sign up, you download a small client, and from there you can create or join three different kinds of rooms: regular chat, poker, or “media.” In the media rooms, you can embed code into the chat window and share and discuss anything that’s Flash, usually video.

If you’re the host of a regular chat room, you can set the number of web-cam slots from two up to ten; media rooms top out at six and, for now, at least, poker rooms always have ten. Each room also supports up to 50 non-videotaped “spectators”, and those uncomfortable with showing their real faces can use silly video effects to cover them up .

The technology allows live streaming at 30 frames per second, and the video quality is as good as you can get from a webcam. It also features VoIP, so chat can be text or voice. If someone’s voice annoys you, however, you can click a drop down menu and press mute to shut them up. Inviting someone from the room into a one-on-one chat is just as simple.

Perhaps because it’s the obvious thing to do, HeyCosmo decided to offer boilerplate social network features — you can create profile pages, share photo and video, write blogs, and so on.

CEO James Im says the company plans to make money with fee-based gaming, premium services and advertising. Right now, HeyCosmo expects to become a destination, but may also consider offering its technology to power existing social networks and casual gaming sites. Texas Hold ‘Em is currently the only game available, and HeyCosmo will have to greatly expand its library of social games if it wants to succeed.

Strangely, HeyCosmo decided to launch without supporting FireFox, and there are apparently some problems getting it to work with Vista, but James says these should be taken care of in a matter of weeks. Mac users will have to wait.

Since it intends to feature gaming, HeyCosmo competes with PopCap, MSN and Yahoo! Games. Some of its features overlap with Skype and the 3D avatar IM and chat service, IMVU. But despite some rough patches and the occasional small bug, HeyCosmo stands on its own. It’s such a simple thing, but we found that playing a game of online poker to be profoundly different when there were real faces to names on the screen.

If it succeeds, it raises the question, what are people doing with their lives? What happened to getting together for an evening and playing cards over at someone’s house?

The company raised around $1 million from various angels and is currently trying to raise $3 million for its first round. 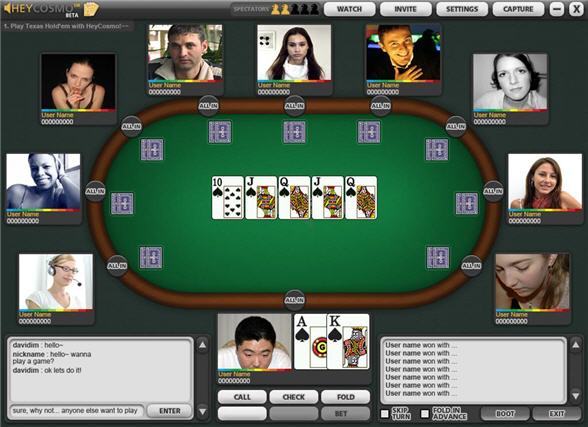