(Updated at bottom with more discussion on differences from Digg, others)

Thoof is the latest company seeking to offer news readers articles that are relevant to them.

The Austin, Tex. company launched today, boasting an approach it says is more useful to the wider masses than competitors such as Digg, Reddit, NewsVine, NowPublic, Topix and others that seek to rank articles. Thoof’s trick is to latch on to information it finds about users’ news tastes, store this information in a place where it constantly updates its list about you, and then steadily improve its service.

It is founded by engineer Ian Clarke, who left the video-sharing site Revver last year, where he had been a co-founder and chief scientist. Two other Revver employees have joined him.

After an initial review of the site, we’re convinced this has great potential, and are keen to see it succeed — because most other efforts have failed to do this job well. By its nature, Thoof does better the more people use it. It depends on user-submitted articles, and so the volume of stories in its system is small at launch. We found no articles on “finance,” for example.

Here’s how it works, and why we endorse the concept.

Like Digg, Thoof provides a synopsis of articles on its home page — this includes headline, brief summary, and tags to designate topic matter. It then provides a link to the article, and sends the reader to the original source.

That’s where the similarities with Digg end. It doesn’t let other readers rank the articles for you. Rather, it offers articles to you based on what knows about you, such as IP address (which provides geographical location), the browser you use, your operating system and the site you were on when you clicked through to Thoof — all of which offer subtle clues about you. Then, additionally, as you search articles, it tracks the tags of the articles you read. Finally, it may soon begin asking you a random question from time to time, to gather more information.

Next, it lets you correct the article summaries. See screenshot below, where the arrows show the multiple ways you can correct a piece. You can propose a change, but it must first be approved vote a vote by members of Thoof’s community. Right now, that community consists of just three people, but Thoof hopes more members will participate as traffic grows. This correction process gives Thoof a leg-up on Digg, which has suffered notorious accuracy problems.

This project is way too early to know whether it will succeed or not. A long-shot? Yes. However, Clarke has put deeper thought into this than we’ve seen in some other throw-it-together jobs on personalized news attempts over the past couple of years.

Before Revver, Clarke built Freenet, a very early decentralized P2P technology designed to let people obtain information on the Internet while avoiding censorship — for use by people in China, for example. He attempted to commercialize the technology, forming Uprizer, but left in 2002 and dabbled in a number of projects.

At Revver, Clarke says he learned the limitations of collaborative filtering technologies used by companies like StumbleUpon and Amazon.com. These services offer you content — music, articles or whatever — based selections by others who have shown similar choices you’ve made in the past. However, the technology slows the more users are added to the system. It also doesn’t work well without the user first surfing for hours — so that the system can track selections.

Clarke also sought to avoid problems faced at other companies: Digg is dependent niche crowd of tech-savvy young males selecting stories, and can’t get out of its rut, he says. It offers no personalization for the rest of the world’s audience. Reddit meanwhile, tends to be politically slanted, and lacks corrective features, thus pointing to the need for editors. Finally, Wikipedia does a good job with editors, but breaks down when dealing with controversy. Some entries, on President George Bush for example, get “locked down” to avoid constant edits by fringe interests. A group of editors voting on changes deals with controversy, Clarke concluded.

Clarke wanted to build an algorithm that can store unlimited amount of information about a user’s interests. Thoof seeks to pinpoint personal tastes in more sophisticated ways, using Bayesian statistics. He points to a company called Cycorp, which is developing large knowledge base, feeding information into it like the “sky” is “blue.” He’s licensing information from a company doing something similar, but wouldn’t specify.

Thoof is built on a Java-based open-source framework called Wicket.

It has raised $1 million from Austin Ventures and angel investor Ron Conway. 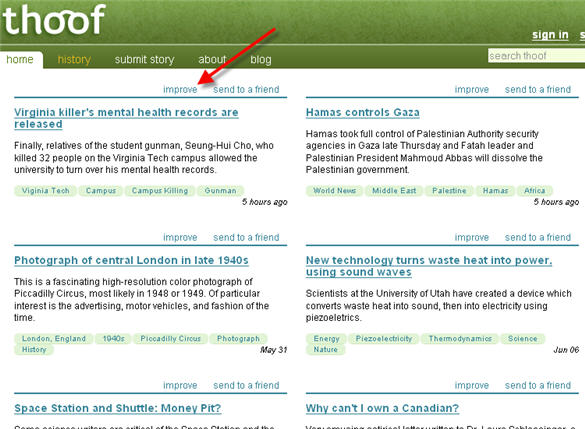 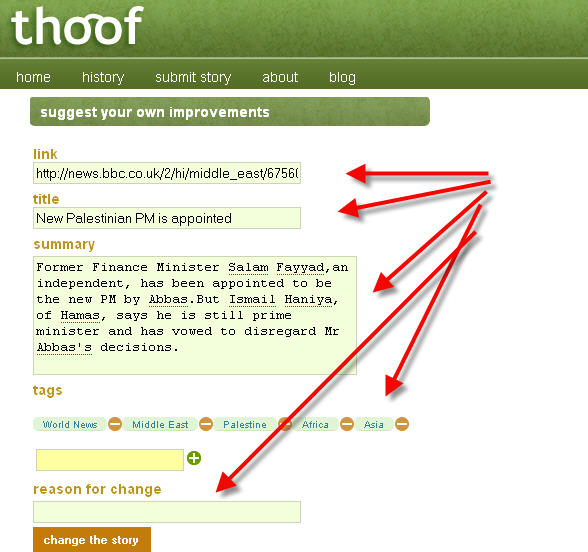