Glam Media, the network of women’s online lifestyle, fashion and other blogs, has surged past iVillage in overall global unique visitors, according to Comscore’s latest data just released.

Glam has scrounged up 30 million unique visitors in a single year — an accomplishment that only MySpace, Google and maybe one or two others have done before it (see table below).

We already mentioned Glam passed iVillage on a national basis in May. The global data shows Glam still surging ahead.

The fast growth of women’s sites has sent industry players into a furious bout of acquisition, merger and partnership talks. Yesterday, iVillage, and its parent, NBC Universal Digital Media, announced it had signed a deal with another media network, Sugar Publishing, a San Francisco company backed by Sequoia Capital. They will share content, and NBC will sell ads for Sugar’s content, exclusively.

Brian Sugar, founder of Sugar Media, said his company had 4.5 million unique visitors this month, and that he wants that number to jump to 25 million in coming months. Those numbers sound a tad high, however, since Comscore reported Sugar had only 1.1 million uniques last month (though that number was for U.S.). The deal included an investment by NBC, amount undisclosed, to help Sugar hire editorial staff to produce more content. It is still not profitable.

We’ve been talking with both Glam and iVillage lately about the true status of Glam, its ad and content network and the extent to which its relationship with independently owned sites is strong enough to justify them being included in Glam’s traffic numbers. iVillage suggests Glam is more of an ad network than a content site, and that its ad rates are not as high as Glam claims. However, we’ve done some researching, and we’re not certain this last assertion about ad rates is true. Moreover, leaked statistics last week purporting to show weak revenue at Glam were partial and somewhat misleading, we’ve come to understand after several talks with Glam and others. Jury is still out, but we think we’ll get more clarity at the end of next month…stay tuned.

Finally, ShopStyle, a Los Altos, Calif. start-up focused on social shopping for women, has emerged as the latest company in this area. It lets women browse brands and favorite items, and create style books. The company tracks these styles books, and thereby gets early insight into fashion trends. It then broadcasts these fashion alerts to its front page. This lets its users dictate fashion trends, rather than letting the industry dictate the, the company says. It also offers information about where to get special prices on the trendy items. However, this site is not advertising based, and so is quite different from the companies above. It has angel backing, but names and amount are undisclosed. 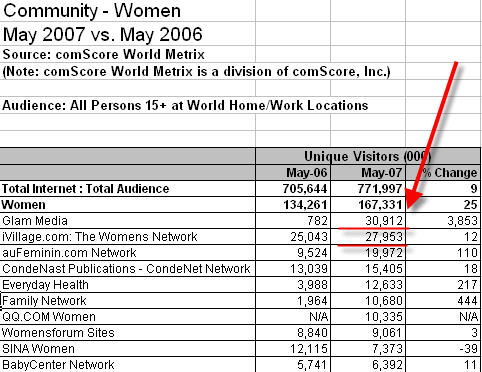