Doppelganger, a virtual world site, has just expanded its offering aimed at teenagers and young adults– with an emphasis on music, dance, and chilling out at bars.

The new site, called vSide, finds itself competing against a number of other virtual worlds, from Second Life, IMVU and Habbo Hotel. While it will have to fight for an audience, the market is hot for these companies if they are successful. Disney recently acquired another site, Club Penguin, for $700 million — that one based on a happy world of penguin avatars for kids.

Doppelganger, of San Francisco, hasn’t experienced much buzz since the launch of its initial test version in February. It has yet to register on the radar of traffic measurement company, Hitwise, for example (see chart below for the top virtual/role playing Web sites for July 2007). However, Doppelganger’s proposition in vSide — a sort of hipper, music/video version of Second Life — makes sense. What better way to feel cool than to hang and chat with friends while listening or dancing to music in a virtual world?

Virtual worlds are a bit of a mystery. I understand the appeal online role playing games like World of Warcraft — where there are missions to do and bad guys to kill. However, Second Life, where, to no particular end, you can walk around, hire prostitutes and barrage other players with flying penises, has always struck me as bizarre. Yet there are apparently millions of people actively using that site.

Doppelganger’s vSide falls somewhere in between the two. Like in any other virtual world, you create and customize an avatar — your digital doppelganger — and can then meet up with friends, go to clubs and so on. In an interesting touch, the site has included a “murder mystery” mini-game. To solve the murder, you have to team up with other users to investigate people and evidence. As you advance, you adorn rare clothing, which you must inspect for clues to open up new parts of the world. Solving the mystery enhances your virtual status, and gives you access to VIP sections of the club.

There are also stores where you can spend real money to buy your avatar designer clothes (Jay-Z’s Roc-a-Wear is a partner). Along with in-game billboards and product placement, selling virtual goods is the way the company aims to make money.

Doppelganger is developing relationships with a number of celebrities and musicians,, most notably Tyra Banks and the successful indie record label, Downtown Records. The virtual neighborhoods are flanked by virtual apartments for celebrities and bands. You can visit these apartments as well as create your own — where you can throw dance parties and control the music.

Since February, Doppelganger claims to have since garnered a couple hundred thousand users. The company won’t say how many of these are active, but notes that those users log an average of 11 hours per month, and 77 minutes per session. Its goal is to become the “next generation of social entertainment.” As Dean Takahashi points out in today’s Merc, “there is so much competition for the leisure time of young people that it will be hard to rise above the noise.” And, as these Hitwise numbers show, Doppelganger will have to rise a lot: 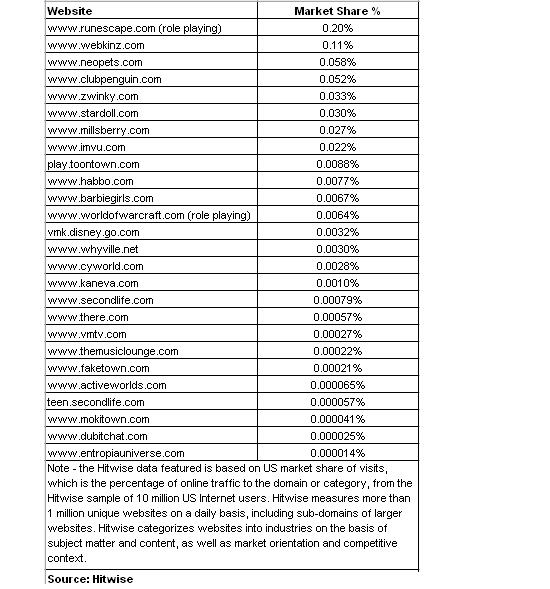