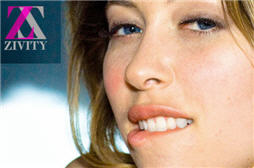 Zivity, a new adult social network start-up, has raised a $1 million round of seed capital from Silicon Valley investors — as it prepares for launch.

Zivity is based on voting system. Paying subscribers vote on the images of women they like, and Zivity passes on a portion of the subscription revenue to the most popular women. There will be some free content to lure users, however you’ll have to subscribe to do things like leave messages for models. There will be blogs, and other social networking features, but video will be rolled out much later, if at all, according to the company.

A representative said a comparable site is Suicide Girls (brace yourself if you click on the link), only with fewer tattoos, less tongue-rings. Models will also not be as locked into the extensive contracts governing the Suicide Girls.

Several former PayPal executives are among the investors. Zivity is run by former execs and employees at Ironport Systems, a company bought by Cisco for $830 million earlier this year. When you’ve made it, what else is there left to do in life than launch an adult site? Jeffrey Wescott, an former Ironport engineer, is chief executive; Cyan Banister, who led Ironport’s customer support, is co-founder. Her husband Scott Banister, co-founder at Ironport is an advisor and investor in the company.

It is apparently based on ruby+rails, python, and/or perl, according to its job list.