The Boca Raton, Florida-based Multiply struggled after launching in late 2003. It was part of the early pack of social networking companies that sprung up in the wake of path-breaker Friendster. It got some initial buzz, but then MySpace, also part of the pack, blew everyone else away. Multiply has trudged forward, almost in the background.

However, it started growing quickly this year. It had more than ten million unique visitors in August, with two million in the US. The number is expanding ten percent a month, the company says. Unique visitors have doubled since it introduced a more streamlined user interface last year, chief executive Peter Pezaris tells us (see Hitwise graph at bottom of article).

Multiply has seen its number of registered users grow to more than six million, Pezaris says, with around 96 percent of existing users returning at least once a month. Note that the number of unique visitors is higher than the number of registered visitors because Multiply allows users to email, say, photo albums on Multiply to friends who are not members, and let those friends view these pages without registering.

So Multiply becomes part of an ever expanding group of social networking also-rans that venture capitalists want to take a bet on — because it might still prove a break-out success.

When the site first launched it was designed to be an all-in-one site for sharing pictures, videos and other media. Key features were created but buried by a slew of bells and whistles — most importantly, its message boards showing users their friends’ activities was placed in a menu together with other options.

The message boards, as the company has more recently discovered, have proven vital for gaining and keeping user attention. Present since the site launched, this feature lets you distribute photos, videos, comments and other information to all of your friends and friends-of-friends. Then Multiply displays this information based on its algorithms for weighing the relationship between you and the people in your Multiply network. The result is a stream of information that users care about most from the people closest to them, flowing through their personal message boards.

The company, however, didn’t give this feature prominence until last November, two months after Facebook launched its own version, called “news feeds.”

At that time, Multiply made its messaging system its users’ homepage, like Facebook (see the company’s sample below). On both sites, this feature has forced users to see what their friends are up to whenever they log in, serving as bait to get users to click through to friends profile pages, photo albums and other items of interest. 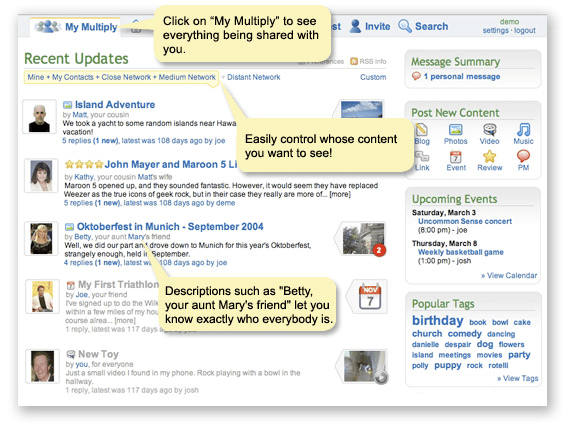 Unlike Facebook or Myspace, the median age of a Multiply user is 35, according to Pezaris, which shows the site’s focus on private, close connections is what this demographic wants. Besides the message boards, Multiply has developed all of its features specifically for networks of friends and family, without the voyeurism of MySpace or the college dorm feel of Facebook. It lets you define your contacts as family, friends, acquaintances, etc. so you can decide who gets access to things like your photo collection; when you share information on Multiply, you have the option to choose exactly which type of person gets to see it in their message board. The average Multiply user has around 1000 people in their network, ranging from close relationships like a spouse, to more distant ones, like a friend of a friend at work, according to Pezaris.

Besides larger social networks, like Myspace, Facebook, Hi5, etc., competitors include Friendster (which is also growing fast), which claims to have already nailed the 30-something market, TeeBeeDee for people over 40 and Eons for people over 50.

The big question for Multiply is whether it can distinguish itself as more 30-somethings join Facebook and other sites. Multiply didn’t rank in Comscore’s recent study of the top social networks worldwide, released in July, because it didn’t yet have the 10 million unique visitors required to be included in the study.

The funding round was led by VantagePoint Venture Partners, with Point Judith Capital and previous investor Transcosmos Investments participating.

VantagePoint’s David Scott Carlick will join Multiply’s board. Carlick was formerly Chairman of Intermix Media, the parent company of Myspace before it sold to News Corp. in 2005.

There’s a NYT story about social networks, including Multiply, that target “seniors” here (via IHT). 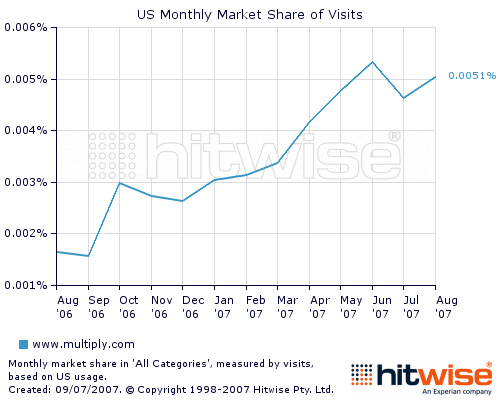