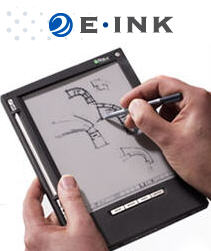 E Ink, the company that supplies “paper like” electronic display technology for the new Sony Reader and other Ebooks, is benefiting from recent attention, including reports that Amazon will use it for its rumored upcoming Ebook

The Cambridge, Mass. company has just raised $16 million in a second round of funding, having already raised a significant $150 million. The decade-old company is still not profitable, perhaps because the concept of an Ebook has had limited success so far. Early companies were NuvoMedia and SoftBook, bought by Gemstar in 2000. It’s still not clear how much demand there will be for the updated Sony Reader, released Oct 2.

In June, VentureBeat’s Dan Kaplan did a good summary of the cool technology emerging in the flexible chip/display area, some of it quite hyped.