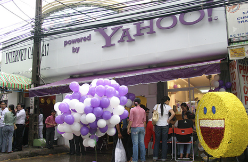 Yahoo launches brick-and-mortar internet cafes in Vietnam — It’s an effort to bring the internet — and Yahoo, in particular — to people who otherwise might not have good access. More here.

Mozilla Corp., maker of the popular Firefox web browser, made $66 million in revenue in 2006 — Its main source of money is fees paid to it by Google in exchange for running Google as its first option in its search box. This revenue shows the browser’s increasing popularity: revenue was up 26 percent from 2005, with the browser now used by 120 million people around the world, or 13 percent of the market.

The internet still probably won’t be taxed in the US, through 2014 — The bill would prohibit state and local governments from taxing services that connect users to the internet. The Senate revised and then approved an earlier bill from the House; now the House needs to approve the changes before it goes to the White House to get signed and made law.

At that time, Oren Dobronsky, one of the owners of HotBar, bought SmartShopper back from Zango for $250,000 then tried and failed to raise funding for it. Almost one and a half years later, Dobronsky has sold it back to them for $9 million, reports Alarm Clock.

Zango is best known for its dastardly tactic of secretly installing software that pops up advertising windows on users’ computers, software that is extremely difficult to remove.

Tioti, social TV site, raises first round — The Seattle company allows users to find TV content, comment on it and recommend and share it with friends with things like an online widget. It has raised a first round of funding from Pond Venture Partners, amount unknown. The company launched this month after acquiring some 18,000 users during a testing period.