A non-profit think tank based in Washington D.C., has released a service that estimates carbon emissions of power plants and power companies throughout the world.

The service, called Carbon Monitoring for Action (CARMA), is run by the Center for Global Development, and aims to provide a central location for anyone to access carbon emissions data of power plants.

CARMA is a visually compelling service based on a massive database containing information on the carbon emissions of more than 50,000 power plants and 4,000 power companies worldwide. Power generation accounts for 40 percent of all carbon emissions in the United States and about one-quarter of global emissions. CARMA is the first global inventory of a major, emissions-producing sector of the economy. In its first two days online, CARMA received 150,000 visitors from 187 countries, a good indicator of the need for a source of such information.

It shows how Australians produce the most carbon dioxide per person in the world, at 11 tons, compared to 9 tons for Americans, and two tons for Chinese. The U.S., though, has the most CO emissions overall (2.79 billion tons), followed by China (2.66 billion tons). It also shows China’s Huaneng Power International releasing nearly 292 million tons of CO2 annually, more than any other power plant. The table below shows information about California’s emissions. 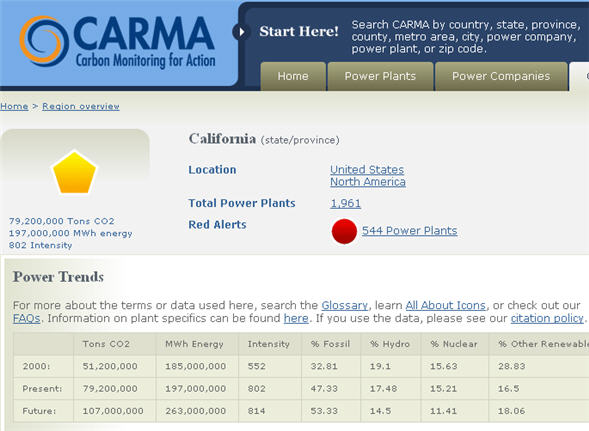 The website is centered on the Google Maps API, which displays the various power plants across the world. Each carbon emitter is displayed by a dot on the map. The size of the dot represents the amount of electricity produced by the plant while the color represents the carbon emissions of that plant. The color code is from green (the cleanest) to blue, yellow, orange and finally red (most polluting). The website allows people to search by country, state, province, county, metro area, city, power company, power plant, or zip code, and the ability to view the most populating and eco-friendly plants in the world or in a geographic region. Unfortunately, proprietary licensing agreements with some of CARMA’s data suppliers prevent them from revealing the fuel sources (coal, gas, nuclear, etc.) of individual plants.

The data used on the map is compiled from numerous sources. Emissions data for thousands of power plants in the U.S., Canada, the EU, and India come from official reports. Other data is derived from information provided by power sector analysts, the International Energy Agency, the U.S. Department of Energy, the Environmental Protection Agency, and a host of other geographic databases. CARMA uses a statistical model that predicts carbon emissions given the size, age, fuel type, estimated capacity utilization, and engineering specifications of individual plants.

In its present state CARMA provides little resource to do anything tangible about global warming. A few other companies have also attempted to provide this information to the public via information from the EPA Superfund database (most notably http://www.scorecard.org/ and http://toxmap.nlm.nih.gov) However, CARMA is the first database that compiles this information on a global level in an efficient and user friendly manner.

Most other efforts at carbon emissions calculations have focused on individual carbon footprint calculators (ZeroFootprint, CarbonFootprint, ClimateCrisis, and the EPA’s climate change calculator) aimed at learning one’s personal carbon emissions. However, CARMA’s effort is useful for community activism because it can motivate local groups to lobby energy plants to switch to eco-friendly practices.

CARMA is a practical tool for providing the necessary information for the gradual phase out of fossil fuel energy plants. CARMA will be most useful for industry entrepreneurs and investors as well as government officials looking to reduce carbon emissions, but has little practical use outside of interesting information for the average citizen. 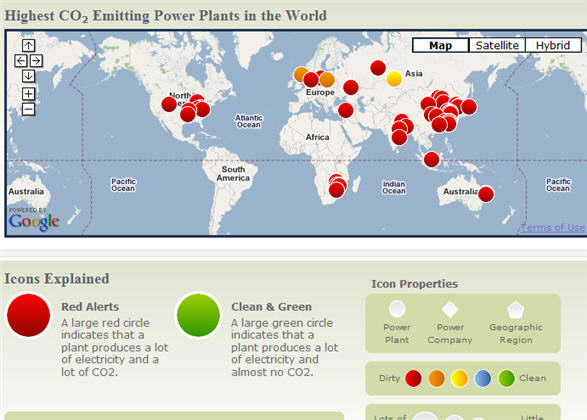