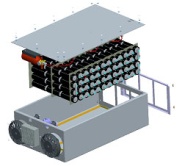 Ask proponents of EEStor about the energy storage product the company is building, and they’ll tell you it’s superior to batteries in almost every way: Able to store far more power, infinitely rechargeable, (mostly) safe, and even cost-competitive.

Just don’t ask anyone if they’ve seen a working prototype of the so-called “hypercapacitors.” The capacitor-based energy product from EEStor was scheduled to start shipping last year to Zenn, an electric car company, but quietly missed the deadline. The company has been secretive (its Web site is under construction, and reveals nothing). Many have begun to wonder if hypercapacitors are vaporware — but now it appears the company may have a real chance after all.

A new deal with Lockheed Martin, one of the nation’s biggest defense contractors, should see EEStor capacitors hitting the market in late 2008. In an interview on the GM-Volt blog, a Lockheed exec says he’s evaluated the Cedar Park, Texas-based company’s production line, and thinks once it gets started making capacitors it will be able to “ramp up very quickly.”

Lockheed plans to use EEStor capacitors for military systems, while Zenn wants to put them in cars. However, the implications of a real hypercapacitor hitting the market are far broader.

In many ways, EEStor could completely replace batteries. Reportedly able to hold 10 times as much energy as lead-acid batteries at 1/10th the weight, capacitors could take the place of batteries in electric cars, provide alternative energy storage applications (such as storage for solar and wind power), and serve numerous commercial storage needs. The Lockheed partnership, which will reportedly use the capacitors for soldiers in the field, also implies that EEStor capacitors could be used in smaller consumer electronics.

All of that would be bad for other new battery startups we’ve reported on like A123 Systems (coverage here) and Deeya Energy (coverage here). However, those two companies have both received far more venture funding than EEStor, which has only pulled in $3 million from Kleiner Perkins Caufield & Byers, plus a $4 million institutional investment from Zenn Motors. Other competitor to EEStor include Maxwell Technologies, AltairNano and Skeleton NanoLab.

Hypercapacitor skeptics still abound, refuting aspects of the company’s technology, from the voltage levels it uses to the ability of barium titanate, one of EEStor’s key materials, to handle the capacitance levels EEStor is claiming. The Lockheed partnership isn’t proof of EEStor’s viability; in the above-mentioned interview, Lockheed exec Lionel Liebman admits, “We haven’t personally tested their prototypes yet.”

For a dumbed-down account of how an EEStor capacitor works, using the example of grilled-cheese sandwiches, look here.