GPS satellite company GeoOptics wants to revolutionize how private satellite data is gathered. It’s developing a low-orbit satellite system that collects atmospheric information by recording how radio signals bend as they travel through the atmosphere to a receiver. It’s a technique known as radio occultation (RO), which was pioneered by NASA’s Jet Propulsion Laboratory (JPL) in the late 1960s. 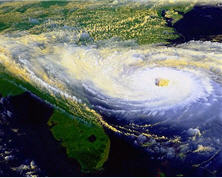 The data gleaned through this GPS-RO process lets researchers predict hurricanes, measure climate change and assess space weather. And because GPS-RO readings are taken in the upper troposphere, they yield more accurate measurements than readings taken from weather balloons or other space-based instruments.

Because GPS-RO satellites are linked to atomic clocks, their frequency measurements are also time-based, while the properties of other measuring instruments can drift over time and produce less reliable results.

Atmospheric data is in high demand not only from the government but from many private companies. GeoOptics hopes that, by privatizing satellite data, scientists from across the globe will be able to access critical information swiftly and affordably, and that the result will be higher accuracy of temperature, pressure and moisture content readings.

The U.S. spends an estimated $5 billion annually for a variety of established Earth-monitoring satellites and forecasting programs. Europe has invested billions of euros over the years on similar technologies. The U.S. government already has ten GPS-RO satellites in orbit as an exploratory proof of concept project.

GeoOptics has an exclusive license to the sensor technology from JPL and plans to manufacture the hardware itself. The company told VentureBeat that it hopes to raise $15-20 million to deploy its system. It says it’s received $10 million in commitments to date but will start an official round next month to cover another 12 to 18 months of development.

The company expects to deploy an operating fleet of about 24 satellites, weighing about 65 pounds each,  with a projected launch of its first satellites by 2011. Each satellite is estimated to cost about $2.5 million including launch contracted through SpaceX of El Segundo, CA.

Founded in early 2007 and based in Pasadena, Calif., GeoOptics is headed by scientist-turned-entrepreneur Tom Yunck, who worked on low-orbit satellites in the late 1980s at JPL, where he helped develop sensors and procedures for tracking the government’s GPS satellite systems for environmental monitoring.

GeoOptics faces no direct competitors at present, however, there’s a growing interest in their technology, and a few companies, such as Raytheon, are investigating how to best compete, says Yunck. The high initial cost of research and development will restrict the market to a few players. GeoOptics hopes to establish partnership with different companies to develop the satellites.