NotchUp may seem like just another job site, but the Los Altos Hills company brings a novel twist to the familiar formula – companies have to pay applicants to come in for an interview.

According to the NotchUp’s Web site, the goal is to give companies a chance to go after those top-notch employees who aren’t actively looking for a job. Founders Jim Ambras and Rob Ellis, both formerly of PeerFlix, claim to have collectively recruited hundreds of job candidates. Based on that experience, they declare that the system is broken for both companies and job applicants.

The company will be launching its product at DEMO next week, but VentureBeat was recently invited to participate in a private beta. Since I’m no stranger to the job search myself (I began working for VentureBeat just a few days ago), I decided to check it out.

Job applicants first fill out a profile. It’s all basic stuff, about as revealing – or not – as your average resume. (See mine in the screenshot below.) LinkedIn users can import their profiles, too. 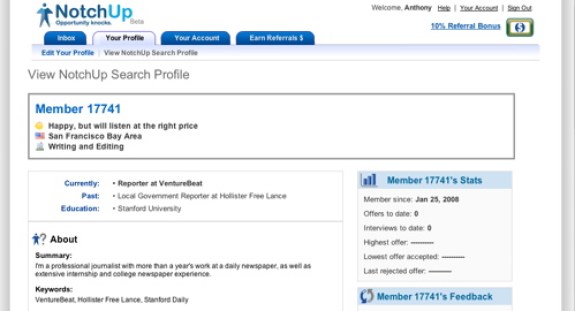 As part of the set-up, applicants decide on a minimum fee that they’ll charge potential employers for interviews. NotchUp offers a calculator to help – you enter information such as education, salary and work experience, and the calculator gives you a suggested price. (See screenshot below.) I, for one, was pleased to see that companies should pay $200 for the privilege of speaking to me. 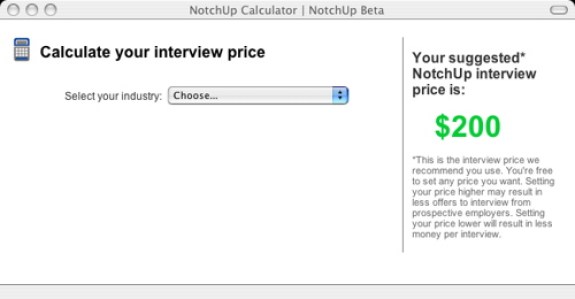 I also typed in VentureBeat Editor Matt Marshall’s information, taken from his bio here. Now, I won’t go into a long comparison between Matt and myself – hey, it’s too early to ask for a raise – but it’s safe to say that he has substantially more education and experience. When it came to salary, I didn’t know what to enter, so I left it the same as my own. If nothing else, that would show whether those factors like education and experience are significant in setting the price.

It turns out they barely make a difference at all. Matt may have a Ph.D and more than 10 years as a journalist, but an interview with him is still worth $200.

Using the calculator involved a little bit of guessing on my part, since many of the job categories are kind of vague. By tweaking Matt’s position so he is an “executive,” not someone in “editorial,” I managed to increase his fee to $210. On the other hand, when I doubled Matt’s stated salary, his interview price jumped to $390.

Ultimately, I only learned so much about NotchUp from the beta, because I could only see the applicants’ side of the process. I doubt attracting job hunters looking to make some extra cash will be much of a problem.

The big questions, however, remain unanswered: Will this really fill employers’ needs? Are they willing to pay those interview fees?

The approach is a smart one because we hear of companies consistently offering finders fees for the best talent. Companies still pay serious dollars – in the thousands – to headhunters to find the right employees. Done right, NotchUp could cut out some of the middlemen and let companies find and approach candidates more directly.

On the other hand, as we found from tinkering, the site may need more research to provide the nuance necessary for a meaningful marketplace. It’s early days, though – the company hasn’t yet launched publicly – so we’ll be watching its progress to see if it can help ameliorate the job industry’s pain, which has seen scores of start-ups try all kinds of models to help, with few making significant traction.

[Update: A number of readers have complained in the comments thread below that they can’t import their LinkedIn profile. We asked NotchUp about this, and VP Rob Ellis said the feature was temporarily disabled because LinkedIn wasn’t happy.

“We have great respect for LinkedIn and are confident that LinkedIn will back up their public statements in regards to data portability,” Ellis said. “ While we already have a work-around that allows our users to continue importing their LinkedIn data into NotchUp, we want to first speak to LinkedIn and find a solution that everybody involved is comfortable with.”]