Click fraud accounts for more than 16 percent of clicks — At least, that’s according to Click Forensics, which has an interest in making click fraud seem high, because that’s its business. It says fraud is even greater on the ads supplied by ad networks, suggesting those networks may be doing a little of the clicking? Google and Yahoo, by the way, have always poo-poohed the idea that fraud is that high. Good news is, the U.S. isn’t nearly as bad as Mexico, India, Argentina and vast swathes of Europe.
Electronic Arts offers $2 billion for Take Two — Video game maker publisher EA is seeking to stay a leader in the industry, and Take Two, maker of the hit Grand Theft Auto videogame, would help it. Details here. 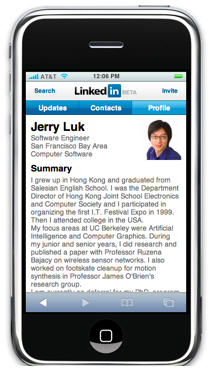 LinkedIn offers mobile app, and multiple translations — LinkedIn is one of those services you usually think about while at work — looking for a job, reaching out to contacts. So it’s not one of those things you’d think would be cool for a mobile phone. But the company says that each day several thousand people try to access it from a mobile phone — we’d venture to guess mostly salespeople on the road figuring out who they know at a company they’re about to visit. It will also soon launch French, German, Japanese, Chinese and Spanish versions. Aside from offering a new mobile version, the company tells Dow Jones (sorry, no link available) it plans eventually to go public rather than being acquired by another company.

Incubator LaunchBox Digital raises $250,000 and will invest it in up to 10 start-ups — Funding for the Washington, DC incubator comes from Reed Hundt, a former chairman of the Federal Communications Commission, Jonathan Miller, former AOL chief exec, Chris Schroeder, chief exec of HealthCentral.com and others. In return for its investments of between $15,000 and $30,000 each, the incubator wants 4 to 8 percent ownership in the companies.

Neterion, a Silicon Valley start-up, introduces hardware to ease bottlenecks between server systems — These bottlenecks made it difficult to use virtualization technology, so Neterion is trying to solve this. The WSJ has the story on the Cupertino, Calif. company.

MetaRam, a new Kleiner Perkins-backed startup, claims massive memory boosting technology — The company says it has created a technology that can quadruple the memory capacity of servers and workstations and cut the prices up to 90 percent. The San Jose, Calif. company was launched by former  Advanced Micro Devices chip architect, Fred Weber, and is backed by, among others, Bill Joy, the former chief scientist of Sun Microsystems, who is now a partner at venture firm, Kleiner Perkins. Dean Takahashi, who starts with VentureBeat tomorrow, has the details at his Merc blog (today is his last day at the Mercury News).
Rumors say Fox Interactive Media in discussions with Microsoft to take MySpace’s ads away from Google, though Fox’s parent, News Corp says untrue —Techcrunch starts rumor. Check out our related coverage of today’s Microsoft ad announcement. Many blame MySpace for Google’s disappointing Q4 performance. Silicon Alley Insider, however, was told by a News Corp. rep this rumor is “100% categorically untrue.”

Nokia and the University of Cambridge launch the Morph, a nanotechnology “concept device” — It demonstrates how future mobile phones may be stretchable and flexible. Sounds cool, but possibly gross. The Morph is on display at the New York Museum of Modern Art.

Hellman & Friedman has agreed to pay $2.4 billion for Getty Images — The S.F. private equity firm will by $34 in cash for each share of the Seattle-based creator and distributor of visual content. WSJ has more here.

DivX is shutting down its video-hosting service, Stage6, on February 28th — The company experienced significant growth of service last year and said it would spin out Stage6 as a separate company to raise venture money. Now it says the service simply became “a very expensive enterprise that requires an enormous amount of attention and resources that we are not in a position to continue to provide.”