We’ve been excited about the prospect of Radar Network’s web app Twine for some time. The application, still in an early beta version, finally opened to press tonight (but not the general public), so I’ve been testing it out for a first-impressions review.

Twine is intended to help its users collect and organize information, acting as a sort of semi-intelligent personal encyclopedia. It’s based on heavy-duty semantic tech developed in-house by Radar — but since it’s open for use, I can stop talking about the underlying technology and focus in on the actual product.

To state that another way: Now that real semantic applications are finally appearing, it’s time to stop talking about how they work and start talking about what they do — and where they could fit into the web ecosystem.

As I said, Twine is a sort of self-constructed encyclopedia, but its real power comes from users who make their profile public, or even open for collaboration with others. In the profiles, users can share information like news articles, documents or videos. The shared items have short (if not quite Twitter-short) summaries, quick and easy to glance over. But when you want to look deeper, there’s much more information, all linked and cross-referenced just as Wikipedia is. In addition, there are tagged sidebars leading off to related topics.

For an example of the tagging, consider a couple documents I put in about two startups. I didn’t bother adding more than a couple manual tags. Twine went through and auto-tagged some words on its own, including “startups”. Clicking on that word took me to a list that included another, related document I’d uploaded, as well as a surprisingly sizable — considering how little information is on Twine so far — and accurate list of articles and comments on startups other users had added. If I’d instead clicked on a tag of a specific thing, like San Francisco, the results would have been even more targeted.

In fact, it’s the tagging that Twine revolves around. Take a look at the image to the right — it’s a list of some 30 tags, sucked out of12 documents and articles I added into Twine. And those tags aren’t all that were picked up — they’re just the ones Twine found most relevant, with the most important clearly visible. More tags reside within individual item pages.

Because of its sharing tools, Twine is like Twitter, Del.icio.us and any number of other current web apps: Good for notifying others of what you’re looking at and what’s useful.

However, it’s also got a memory and some limited ability to “think” by cross-relating all of its accumulated information, so Twine strikes me as a potentially great research tool. That’s in line with something founder Nova Spivak told me a few months back, that information-overloaded professionals like engineers, investors, journalists and lawyers are the target audience.

But now some caveats. The user interface needs some serious work to make the process of pawing through saved items much faster. Auto-tagging is also still fairly unreliable, with errors popping up like one I found when adding a San Jose Mercury News article, from which Twine ended up pulling in tags from unrelated stories.

Such problems are caused in part by the chaotic array of different designs and standards on the Internet, but ironing out the glitches is entirely up to the team at Radar. At some point, they need to create a break-even point for widespread adoption: The amount of work users put into building their Twine must be far lower than the value of information that’s fed back, in a convenient and intelligent form.

I’m confident the engineers at Radar can handle the difficulties, but there are several other semantic and natural-language startups hot on their heels, most still in stealth mode. This should be an exciting year for new applications in this area, and I’ll be reporting on more soon. In the meantime, look out for Twine to start opening to the public this month (more about that here, along with some funding info). 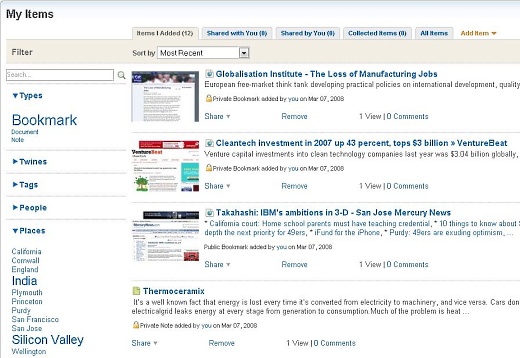