When we talk about solar power projects, the cost is generally counted in the millions, not billions, of dollars. But a new deal between the California utility PG&E and a solar thermal company heralds the next age of renewable energy, when capital begins to flow in earnest. 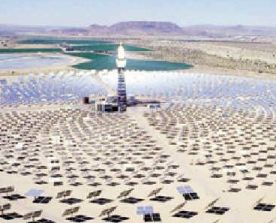 BrightSource, which has signed a contract with PG&E to supply 900 megawatts of energy (enough to supply over half a million households), will require between $2 and $3 billion to build several plants in the Mojave Desert. It’s the biggest solar project planned to date.

To get the full 900MW, BrightSource will need to build five separate plants. The first, a 100MW facility, will be running by 2011, CEO John Woolard told the San Jose Mercury News. The remaining four 200MW plants will be built over the following five years.

Solar thermal, in a nutshell, uses fields of mirrors to concentrate lots of sunlight on a single point, usually to boil water that in turn drives turbines. Specific designs vary; BrightSource uses a central tower with a boiler chamber mounted on top. But like a race horse, it’s performance that matters, not appearance.

Among current technologies, BrightSource and its rivals — Ausra, Solel and some smaller players — offer the cheapest way to generate electricity from the sun’s rays, far outstripping solar cells. But their real competition is energy from every other source, including coal, nuclear and oil.

The rates at which PG&E agrees to buy electricity from renewable sources aren’t disclosed, but the utility will likely pay prices close to those on existing energy sources — and if PG&E got the upper hand at the bargaining table, it might even pay rates low enough to be competitive with coal, which could drive some solar thermal players out of business. To date, PG&E has also struck deals with Ausra for a 177MW plant, and with Solel for 553MW.

BrightSource is perhaps more familiar with the cost equations than any other company. In fact, it’s chaired by one of the few people in the world with decades of experience in large-scale solar thermal — Arnold Goldman, whose Luz International built nine plants in the 1980s. The plants still exist, but Luz is long gone. BrightSource, which has a subsidiary called Luz II, is its spiritual and technological successor.

While Luz I didn’t survive, its extinction can also be attributed to the return of cheap oil, a scenario we aren’t likely to see again. When oil prices dropped, California and the federal government saw less reason to subsidize oil alternatives. In 1990, the company even admitted that if goverment incentives dried up, it would need “a miracle” to survive.

Those miracles — peak oil and global warming — are here, even though they’ve arrived 18 years too late for Luz. Under those twin threats, BrightSource and other solar thermal companies will likely benefit from incentives and rebates until they definitively succeed (or fail) in their quest to provide cheap energy.

There are a few more rays of hope for BrightSource. According to the company, its current technology is almost twice as efficient at converting solar power to electricity as Luz’, and the cost per kilowatt-hour has dropped to 70 percent of what it was. It also switched from curved to flat mirrors, making production cheaper. And if it doesn’t survive with all those positives — well, at least the plants will keep operating.

BrightSource is based in Oakland, Calif., while its Luz II subsidiary is in Israel. It has taken less than $50 million in venture funding from Draper Fisher Jurvetson, the J.P. Morgan Bay Area Equity Fund and VantagePoint Venture Partners.