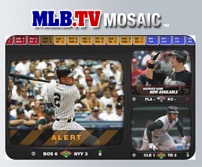 Watching sports online is a growing trend. After all, many people are fans of sports teams from all around the country yet don’t live in the market where their games are broadcast. Major League Baseball is having trouble keeping up with that growth as just a few days into the new season, its MLB.TV online service has had two straight days of outages.

MLB.TV is currently using a product called Mosaic to deliver the games online. Yesterday, a message was posted on the site’s blog letting users know that the application had been disabled while a team looked into difficulties that were popping up. A few hours later, the application was up and running again, but users were still reporting problems, according to IDG News Service.

Users of MLB.TV pay a subscription fee to watch the games they want in real time or on-demand. These fees can range anywhere from $14.95 per month all the way up to $119.95 per year. Paying these prices, fan certainly expect to see opening day for their teams, but many missed out.

As such, it should be no surprise that the users are not happy. Judging from the comments on the blog posts, the umpires and players fans traditionally heckle at games have it easy compared to what MLB.TV is now getting.

MLB.TV looks especially bad when compared to the ongoing NCAA Tournament which has had great success in its presentation of games online through CBSsports.com. Traffic numbers have been huge and that service is also available to everyone for free.

Major League Baseball had been heavily promoting MLB.TV Mosaic’s new support of Microsoft’s Silverlight technology. This partnership was to bring higher quality video to users — which of course doesn’t matter if they can’t see it.