Syncplicity is launching the public beta today of its file-synchronization software which brings a new level of simplicity to sharing and backing up data.

To install it, you have to be running Microsoft’s .Net Framework 3.0 on your computer. If you have that, then it’s easy to download and install the Syncplicity application. All of your documents, pictures, music and videos are automatically synced and backed up. You can use a handheld computer, cell phone, laptop or desktop and not have to worry if the file you have is out of date, says Leonard Chung, CEO.

“We created this for the users who ‘just want it to work,'” he said. “We break down barriers on your computer and bridge the online and offline divide.”

If you write a letter on your desktop, it is automatically synced with a laptop, shared with others as indicated, and available as a Google Doc or on Facebook.

The app targets users with multiple computers, small businesses, collaborators, digital media users, and road warriors. The application also makes it easier to collaborate with others because it has an “intelligent conflict resolution” feature that lets people work on the same document at the same time without fear of losing data, Chung said.

That should help it compete better among the sea of backup, sync, and sharing applications already available. Competitors include Box.net, Dropbox, Sharpcast’s SugarSync, Microsoft’s Foldershare, Mozy and Hewlett-Packard’s Upline. 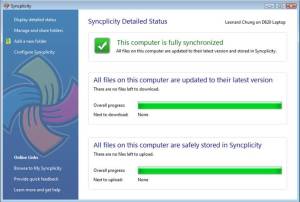 Syncplicity’s other features include sharing documents with those who don’t have Syncplicity installed, military-grade encryption, and multiple backup locations.

The app is free during the three-month or so beta period. After that, some portion of the service may cost $20 a month, Chung said, but the pricing plan isn’t firm yet. Chung thinks $20 a month is a bargain, considering the company doesn’t put a limit on how much data you can store on an online site and how much you can share. Today, Syncplicity works on PCs but a Mac version is expected early in the next quarter. The app is built on open web services, Chung said.

The San Francisco company has just four employees and a few contractors. It was founded by Chung, who formerly worked at Microsoft on Windows PowerShell. He also worked on the SETI@home project and at the Internet storage company Scale Eight. Co-founders include vice president of product and platform Ondrej Hrebicek, another Microsoft alum, and vice president of technology Isaac Hall, formerly development manager at Crackle.

The company was started a year ago and is financed by angel investors including Crackle’s David Samuel.