The Microsoft-Google battle has opened a new front today with the launch of Microsoft’s Live Search News, an aggregator that’s mighty similar to Google News.

At first glance, at least, this looks like another area where Microsoft will be the underdog. As a professional news junkie, I live and die by Google News. Other aggregators, such as TechMeme, have found some traction, but they’ve done it not by competing directly with Google, but by using a very different model and focusing on a specific niche.

Live Search News does have some unique features of its own. For one thing, there’s a local news sidebar, which takes your IP address and finds news stories based in your area. (It’s located to the right in the screenshot below.) The sidebar is pretty nice, since it helps readers quickly find stories that are directly relevant to them. Google News recently unveiled a way to find local news, but it requires a search by town name or zip code (our coverage).

The site also features top news videos and, according to CNET, will alert readers with breaking news at the top of the page. (I’m not seeing the breaking news bar right now.) 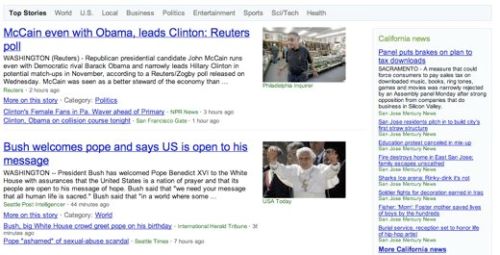 The site doesn’t have as many news sources as Google yet, and appears to be dominated by big, traditional news media. For example, literally all of the stories that appear in my local news tab come from the San Jose Mercury News. (I’m in Palo Alto right now.) And just as a comparison, when I do a search for “Google” and “Salesforce” (to pick a recent tech news story at random), I get 349 results in Live News Search, compared to 723 in Google News.

Keep in mind that I’m a little biased here, since VentureBeat is one of the news sources that’s been left out, although I found the stories we’d syndicated through the Mercury News and the Industry Standard. But then, we had to lobby Google to get into Google News, and we’ll probably have to do the same here.