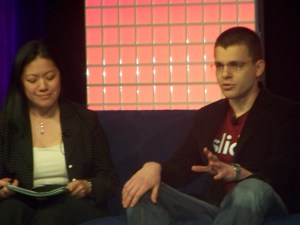 (Note: So begins our live blogging efforts at the Web 2.0 Expo. Please check back for early looks at significant news from the Moscone West convention center in San Francisco as we cover the various talks. I’ll be updating this post as the keynote unfolds).

Max Levchin, the founder of widget maker Slide, has kicked off the conference. He is being interviewed by Forrester Research’s Charlene Li on stage now. Slide is a social entertainment company whose widgets add context to social interactions.

“The primary value the consumer derives from it is fun,” he said.

Is it a fad, Li asked? Nope, he said. “It’s the only thing that prevents social networks from becoming fads.”

She noted the value of the company is $500 million. “How do you make money?” she asked.
He replied that advertising is what delivers the money. Slide has a brand. It can approach top advertisers, sell sponsorships, impressions and what not.

“The future of social apps are split between brand advertising and direct-to-consumer sales,” he said. The latter is what the next few years will be all about. He said he got back from Asia, watching people make billions of dollars selling virtual goods, like eyes or hair for characters in online games or social networks.

“What are brands doing in the widgets?” Li asked. This gets back to the widgets themselves and the idea they’re not fads. The value the advertiser receives is they can inject themselves into the context a Slide application creates. It’s fully interactive, but as engaging as TV.

“That’s what the advertisers crave: engagement,” he said. “That’s what we deliver.” With Super Poke, for instance, you throw a sheep at your friends on Facebook. Every Super Poke campaign has been a huge hit with advertisers, Levchin said.

Asked if privacy was an issue, he said, “Yes.” He said from previous gig, PayPal, that was clear. “The cool thing about the way Slide does things is we are successful at bottoms-up analysis,” he said. “We don’t use the names. We start with ‘user x’ and then proceed. We see a pattern of usage. And then we sort them into affinity groups.”

Li noted that Slide may become more successful in some ways than its host, Facebook.

“Successful social value builders are the ones that build real value,” he said. “If you wake up in the morning and wonder, will they take it away from me, you probably deserve to have it taken away.”

If you build a connection with the user, and they want to use your application, then the social networks can partner more aggressively on revenue opportunities. So long as the context you create is valuable to the advertiser, then it works, he said.

“I sleep relatively well at night,” he said, regarding whether Facebook sees him as a threat to be eradicated. Li commented, “The rising tide lifts all boats.”

She asked about application spam. She, for instance, doesn’t want a lot of people throwing spam at her. Will that choke off growth of social networks? Levchin said the unique power of the host and the software developers is the ability to spread content in an insanely fast way.

There is a big intellectual challenge here, he said. Spam will get dealt with the same way that spam is dealt with today in other platforms, he said. Blocking doesn’t work. Our plan, he said, is to create levers for the users that are so easy to control spam so that they don’t find the unsolicited contact annoying.

“We are certainly aware of how it could be annoying and we could get hurt,” he said.

She brought up all the publicity around him as the “poster boy of Web 2.0.” The articles say, “Don’t bet against Max.” He said he lives for trying to outdo others. He said it is embarrassing to be on a cover and it’s a lot of pressure to be a poster boy. “The drive to do stuff is real,” he said. “The trick to success? I have no idea of what it is. When you hire people, you basicaly look for drive.” The measure of success he figured out over the years is two fold: the number of people who use what you make worldwide and can’t live without it. That’s the metric he cares about the most.

“It’s altruistic and tree-hugging,” he said. “The other number, stated as a joke at one point, is the number of people who make $1 million or more in your employee roster when the company has an exit.”

He notes that he is extremely uncomfortable being in front of a large audience. What is his advice for the Max Wannabees? His favorite quote of all time is from Winston Churchill: “never never never never surrender.” Here’s a link to last year’s Q&A with Levchin.