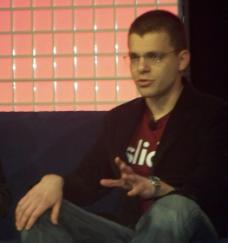 I just sat down with Max Levchin, chief executive of leading widget-maker Slide, after his talk at the Web 2.0 Expo this afternoon.

He gave me more information on Slide’s interest in forms of revenue besides advertising and the role of feeds — like Facebook’s news feed or Friendfeed — on the web. He also tells me about the increasing number of application programming interfaces for third-party developers, and how maybe one day there’ll be APIs that let him create multimedia widgets featuring his favorite Russian rock band.

VentureBeat: There’s been a lot of talk about sites like Friendfeed, that let you see what your friends are up to across the web, on various services. Do you think this is a standalone company, or will large networks dominate, sites like Facebook that also have feeds?

When there’s a powerful network affect, then there’s not a lot of room for more than one winner. You have a winner that wins big, then also-rans that occupy niches. Its unclear to me whether that’s exactly how it is in Friendfeed’s case — but it’s clear that the news feed within Facebook has a very powerful network effect.

Right now, I’m not sure whether [Friendfeed’s] service adds so much value that it essentially stands alone [although Max notes he hasn’t been focused on studying Friendfeed, and may be wrong]. Any one of the sites that appears in a feed can also offer its own feed.

If there’s doubts about the genius of Mark Zuckerberg [Facebook’s founder and chief executive], then the feed is proof that he has something gray between his ears that ticks pretty well.

[Facebook was the first large social network to introduce the feed concept, and it has since been widely emulated by social networks and other sites.]

VB: Nearly every web company seems to be launching their own application programming interface, to let other services in one way or another interact its data and features. While the significance isn’t yet clear, these APIs are creating new business models, ways of filtering lots of information and standards for helping lots of services to interoperate. [Check out this post by Marshall Kirkpatrick of ReadWriteWeb for more on that.]. What impact do you see this movement having?
It’s obviously pretty cool but the reason it matters is because the web is becoming more centralized. We’re becoming slaves to our social networks — and that’s not a bad thing. You like your favorite networks, so do you friends, and pretty soon you have market winners.

It doesn’t change the fact that even the largest are still young and in need of help. That can mean not just throwing sheep in Facebook, but doing it on other sites.

But it gets more complicated, and lawyers are helping these companies define how to help users how to do things like revenue sharing and data sharing across networks. To some degree, it has to do with the culture and the mores of the social network? Maybe a network wants to maintain privacy to the degree that they don’t share information with other sites like that.

VB: Put another way, how will this rush of APIs affect social networks themselves, and their competitiveness on the web, versus a myriad other services?

Since there’s more than one large network and more than one developer, you wind up with competitive dynamics on both sides. The network who are more open will attract developers; the developers who measure better and understand how to improve their applications will in turn attract more users.

VB: So does it matter if smaller companies have their own APIs?

Well, there are two different kinds of APIs. There are those that let smaller sites incorporate with each other and with larger sites. In that sense, we’re little guys with our audience spread across other sites — we’re not a destination site. But we have a way, for example, where users can create slideshows automatically on other sites through our slideshow service.

Most of the sites that have interesting APIs are inevitably niche players — sites that are so deep and so interesting to some subgroup of people that it can’t be fully normalized.

For example, I’m always using Facebook, Myspace and my web email — except I’m also really fond if this Russian band called Aquarium, one of the oldest and most popular rock bands in the country. There’s a very small group of English speakers who happen to want to socialize about the band, so I also hang out with them on a site called Dharmafish.org.

There’s also a large, Aquarium fan site, created by fans where people upload and freely share DRM-free tracks from the band. The band knows about the site and is fine with it.

I’d love to have an API where I could build mashups of these songs from the band, concert photos, pictures of my ticket stubs, my recordings of the band that I got from Russian TV, then share that mashup with the other fans I hang out with on Dharmafish.

The Dharmafish site is as big as it will ever be [Aquarium has yet to hit the charts in the English speaking world]..it’s a niche site. A widget creator who likes the band could create widgets for the band that could be embedded on discussion boards, fans blogs, and other sites.

One of the things that you see happen is that major app developers like Slide are creating inverted APIs, so smaller sites can take advantage of services like our slideshow creator, letting their users create and embed our slideshows on their sites.
VB: Okay, so Facebook has its own platform, and its most significant competitors are all working together on OpenSocial? Will Facebook continue to matter?

Facebook is the standard and its important as a site and as a platform. My argument about openness implies that OpenSocial will continue to have all sorts of local extensions. But we typically think about it at the level of networks. We don’t spend too much time obsessing over which standard is best. They’re generally elusive. You can’t guarantee that you’ll continue loving them.

We focus a lot of our energy on Facebook and Myspace as well as on the next level of social networks, like Hi5, Bebo and Friendster. We’re also interested in emerging markets where social networks are growing like crazy. Some of those aren’t open, like the Chinese social network Xiaonei. Its a lot like Facebook — and it has 22 million users — but it doesn’t allow widgets. It would be awesome if and when it does.

Facebook and Myspace are the US audience, which is tried and true when it comes to being susceptible to ads. Hi5 meanwhile, is growing very quickly, and it’s possibly the fastest growing social network outside of the US.

We prioritize by total revenue possible — do we or will we have a way to make money on this platform? Yes or no. You can make a very very clear value statement based on that about which networks you’re going to spend time on.

VB: We’ve covered your advertising efforts, but what about Slide offering ecommerce services like online shopping, or Slide selling virtual goods?
The short answer to your question is yes. It’s just a matter of what’s the top priority, what’s the second priority.

When I think about Slide, I ask myself “why do I have to go to eBay to bid on stuff?” I know eBay has pictures of things you can buy, but what about mousing over somebody’s picture, mousing over their t-shirt or a gadget, and seeing a popup that will show me how much it costs and where I can buy it. Obviously, that’d be a powerful concept if it works.

One piece of the problem is recognizing what’s in the picture — sometimes consumers can do this, sometimes you need to help them, and that’s harder.

The other piece is whether or not people will really go through with a purchase right then and there. Will they feel comfortable giving a widget their credit card number?

This is a pretty lofty story, but somebody will do this. It might not be Slide, but the idea of socially driven commerce — it’s what people do in real life. People like to go shopping at the mall together. There’s something to that.

VB: Last question: What’s Slide’s revenue projections for next year.
42 [Important note: This is a joke from the series The Hitchhikers Guide to the Galaxy, where the number 42 is the obscure answer to the question: “What is the meaning of life.”]. I shouldn’t have said that, I should have said “fish” or something, because somebody will misinterpret me because I said a number.

Right now, it’s not about getting profitable. We can definitely get profitable and that’s not a question any more. The question is: Can we build revenue streams of permanent financial value, that last and grow — as opposed to those that are there during certain frenzies.