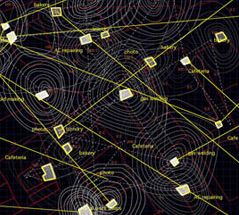 Writing on Nanosolar‘s blog, CEO Martin Roscheisen has unveiled the next prong in his firm’s business plan — a focus on municipal solar power plants of 2 – 10 megawatts in size. The idea is to build 10 acre lots on the outskirts of small cities that could feed into the municipal power grid directly.

Each lot, consisting of several rows of solar panels mounted on rails above ground, could provide up to 2 megawatts, enough to serve 1,000 homes. The panels would be mounted on rails to prevent them from affecting the surrounding wildlife and vegetation.

Nanosolar’s scheme could be scaled up to supply the needs of larger cities — for instance, 5 lots, which would generate 10 megawatts of electricity, could serve 5,000 homes. Unlike coal-fired plants, which typically take 10 – 15 years to build, solar power plants can be done in as little as 12 months — and much more cheaply.

Though Rosencheisen acknowledged the appeal of rooftop arrays, which solar installers like SolarCity, Sun Run and Sungevity focus on, he also criticized them as a business “that’s difficult to scale rapidly in a truly meaningful way,” and “a somewhat more expensive proposition.” Imagine having to hire a contractor to crawl around your roof to install an expensive array or — worse yet — having to set it up yourself, he noted irreverentially.

This small plant approach, though new to the U.S., has already been widely implemented throughout Europe and Asia in what Rosencheisen called a “silent revolution” that has yet to be picked up on by the mainstream press, and that is too often criticized by utility executives as being too costly or unrealistic. “It works, it is economic, and it is possible now,” he said.

Nanosolar has gotten plenty of attention for its claim that it can sell its cells for as low as 99 cents per watt, low enough to be competitive with non-renewable energy sources, as well as recently raising over $50 million more from EDF Energies Nouvelles. However, there are a number of other, less-sung companies that have either implied or outright stated that they have a similar game plan for small-scale power plants.

SolFocus, for example, makes large solar concentrator panels, which use mirrors to focus more light onto highly efficient solar photovoltaics. Its initial product isn’t designed for rooftop installation, but would work perfectly on open spaces near facilities that need modest amounts of power — such as universities or off-grid villages. It raised $63.6 million last year to build its panels in the U.S. and, through its new subsidiary SolFocus Europe, across the Atlantic.

In fact, the move to build small has swept most categories of solar power, as companies have come to realize that they can thus avoid most of the bureaucratic snags involved in building plants that produce over 50 megawatts. Furthermore, by grouping their panels into small lots, they’ve been able to grab small tracts of land on the edges of cities and towns, or on land that can be dual-purposed like farms. A secondary advantage is the ability to hook into the existing power grid without the modifications required to channel power from a large plant.

Another example is Cool Earth Solar, a startup based in Livermore, Calif. that hews to the “cheaper is better” model, using inexpensive reflective balloons to concentrate light on cells. It plans to suspend its balloons on cable-bound arrays 12-14 feet above active farmland, letting sunlight strike both the solar cells and crops beneath. The firm claims that it can produce electricity for 18 cents a watt, and hopes to ramp up its production of balloon concentrators to 50 megawatts by next year.

And there’s Infinia, a company that just raised its second round to $57 million, which specializes in the production of 3 kilowatt dishes that, lumped into groups, will generate 1-10 megawatts in small-scale projects. Finally, in the solar thermal category, there’s eSolar, which just snagged $130 million from Google, Oak Investment and Idealab to pursue a similar approach — building a number of small plants that produce up to 33 megawatts each.

The only category to have mostly stayed away from this trend is expensive silicon-based solar, which is generally relegated to rooftop installations. Yet even there a few exceptions are already starting to appear. OptiSolar, for example, a Hayward, Calif., based startup, makes somewhat less expensive thin-film solar cells. It last year announced plans to build a 40 megawatt solar power installation near Sarnia, in Ontario, Canada, and has since announced several more of a similar size.