Many social sites in the web 2.0 age try to be all things to all people, a la MySpace and Facebook, but Chief Executive Anand Subramanian says that Toronto-based Jhankarbeats is filling a much-needed niche by focusing exclusively on the South Asian music market and, more specifically, on helping new artists find an audience.

The site is rather simple, a bit reminiscent of Garageband. It features a few songs and artists on its front page, but also lets users discover songs and artists by language: Bengali, English, Tamil, and Hindi, or genres, such as Indipop or Indirock. Users can play and rate the music, while each artist has his or her own page where users can leave comments, although it doesn’t yet feature friending capabilities.

JhankarBeats was the first web site to target almost all forms of South Asian music, says Subramanian. Close competitors include Saffronconnect, Desihits, and Radioverve. Desihits, the behemoth of the bunch, is a major South Asian label all-media stop — videos, music, and mp3 downloads, where lower-key JhankarBeats focuses on unknown artists, many of whom hope one day to land in Bollywood.

“JhankarBeats fills in that void, helps artists showcase their music to a global audience, helps them get valuable initial feedback, helps them get discovered by production houses, and will soon allow artists to sell their music online,” Subramanian says.

Jhankarbeats plans to take advantage of music’s prominent role in Bollywood by structuring placement deals between the top artists on the site and film producers, an underdeveloped industry Subramanian says.

Subramanian is adamant Jhankarbeats will succeed, even in a saturated social music space, where players like MySpace dominate.

“The problem with MySpace is that it’s so much tuned to English rock music, I feel that other genres get excluded,” he says. “India has more than twenty-five languages in which people can sing and produce music. But these people would never come to iLike and post their music — it’s different.”

Subramanian graduated from Bengal Engineering & Science University before working at Novell R&D and Comet systems, a small consulting firm in Silicon Valley. It was while working on his masters in computer science at the University of Waterloo in Canada that he hatched the idea for JhankarBeats, which shares the name of an Indian movie.

In 2003, while in graduate school, he and a few friends were part of a band that wanted to share music. When he stumbled upon MySpace, he thought it only a second generation Lycos or Geocities, while Subramanian wanted something more particular for South Asians.

It wasn’t until three years later, however, that he finally developed and released Jhankarbeats, in October 2006. He looks at the company as more of a passion than a business, but has recruited three friends to help develop the startup, one in India and the other two in Toronto.

And while the business model is not fully developed, Subramanian says he already has an Indian TV-producer friend who has scoured Jhankarbeats looking for artists to collaborate with.

The self-funded company, which Subramanian says garners 60,000 unique visitors per month, is looking to become an independent label, by providing gigs at local Indian restaurants, opportunities in production houses around the world, song downloads, and ringtone purchases — all revenue shared with the artists. 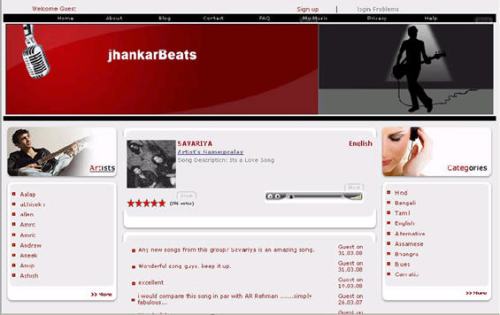