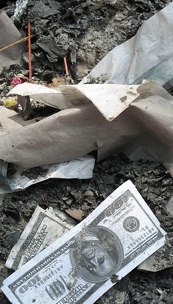 Okay, Microsoft’s attempt to buy Yahoo fell apart — so now what? Well, in his letter to Microsoft employees, chief executive Steve Ballmer says that Microsoft will be just fine going forward without Yahoo. As a company, that may be true. But what about its long term goal of taking the lead online?

If current trends hold, Microsoft is not going to be overtaken by Google in the online realm. It needs to either step up its game or purchase some other big name Internet companies. Luckily, it just saved itself about $50 billion today.

So the question now is, who will Microsoft buy? Already, quite a few people are pointing to AOL. It’s a fairly obvious choice. Time Warner badly wants to spin them off, and they have held talk with none other than Yahoo about a potential merger. While AOL has long been looked down upon in the Web 2.0 world, there are some signs that it could be turning itself around in a meaningful way.

Beyond AOL (and of course Yahoo and Google), Ballmer himself has noted there aren’t too many really large Internet companies out there. Social networks Facebook and MySpace both certainly qualify, but MySpace still has an ad deal with Google and Microsoft already owns a piece of its main rival, Facebook. Could Microsoft try to buy a larger portion, and thus more influence, in Facbeook?

Here’s another idea on a smaller scale: Digg. Microsoft has an advertising deal with the social voting news site already, and can certainly afford the rumored $200-300 million Digg is looking for to sell. As to how that would go over with the Digg community…well, lets just say those Flickr protests (Yahoo owns Flickr and its users were unhappy over the proposed takeover) would probably look pretty tame when compared to what we’d see on Digg.

So here another idea: Twitter. The online micro messaging service could likely be had for what Microsoft would consider pocket change — even the highest valuations are “only” $150 million. There would be a lot of questions as to what Microsoft would actually do with Twitter (as well as what anyone actually does with Twitter), but it would certainly be a nice, buzz-worthy purchase in the short term.

What about another buzzed about service, FriendFeed? Given that most of FriendFeed’s core team comes from Google (with more coming every day), it seems unlikely they’d want to sell to Microsoft.

Who else? Maybe Meebo, the IM service recently pegged at $250 million? The $560 million valued Ning? We’re really just throwing names out there now based on high valuations. It’s simply hard to say what Microsoft will do at this point, but you can bet it will do something — soon.