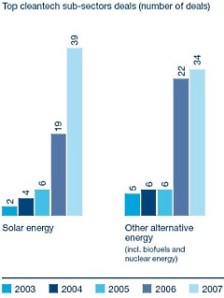 Venture capitalists invested $2.2 billion in cleantech companies over the last year, excluding debt and other non-venture financings. That’s a significant 45 percent growth in 2007, and a more robust level than earlier expected.

The data comes from the new MoneyTree report from PricewaterhouseCoopers released this morning. The report finds investment levels in cleantech are at a higher rate than what was reported a few months back by a competing research company, Dow Jones VentureSource.

According to the report, solar installations were by far the most robust, with 125 percent growth, and investments to solar leaped 133 percent to almost $600 million.

Wind and bio-ethanol did well but not quite that well, with installation and production gains of 45 and 32 percent, respectively. However, wind investment grew over tenfold to $115 million. Biofuels fell from 2006, in part due to increased caution over corn-based ethanol.

Take a look at PwC’s chart below, which pegs the growth of cleantech to the rise in oil prices. Note how cleantech hits a sudden spike in 2005, in part inspired by the Iraq war a push toward biofuels in the name of energy security. But, as noted, biofuels are now getting less investment. Now other technologies are getting a push, even as oil prices have unexpectedly taken off, hitting $100 per barrel in February and just crossing a record price of $120 yesterday, with some analysts predicting prices as high as $200.

In part the rising cleantech star is driven by technologies that have nothing to do with electricity or fuel, like those that help reduce pollution and promote recycling, which grew to over $200 million in fundings in 2007.

But you can bet that if high oil prices stick for any period of time, or rise even further, cleantech investment, especially in electricity generation and transportation fuels, will shift even further toward a vertical line.

Even without back-breaking energy prices, the upward trend will likely continue for some time, says Tracy Lefteroff, the global managing partner of PwC’s venture capital practice. Although many venture capitalists have viewed cleantech with caution for several years, he told me, “there’s a phase now where people are seeing there’s sustainability, that they need to play in this space. The demand for these products is going to continue.”