For almost two centuries, Central and South America have become synonymous with economic paralysis. Economic growth has been limited by ruling oligarchies and dictators, restrictive policies, and foreign meddling.

But with the new era of globalization, the status quo is under attack.

A report released today by the Latin American Venture Capital Association (LAVCA) suggests that, like much of the rest of the world, Latin America is rapidly opening up to investment and entrepreneurship. LAVCA rates its 13 constituent countries by a “scorecard” that shows their progress relative to investment-friendly countries like the UK and Israel. This year, two countries, Brazil and Chile, have leapt above their peers, while most others are also on their way up. 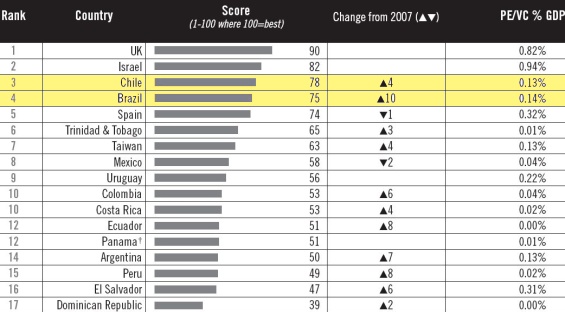 The LAVCA scorecard is not the end-all measurement for entrepreneurial growth. As a percent of gross domestic product, venture investment throughout Latin America is still low, and challenges like governmental corruption remain. However, anecdotal evidence suggests that at least one economy, Brazil, is large enough to attract the attention of international investment firms, including some in Silicon Valley.

I also recently had a conversation with the managing director of IBM’s venture capital group, Claudia Fan Munce, who had just returned from a venture capital symposium in Brazil. Though IBM has had a corporate presence in the countryl for almost a century, its interest in venture investment there is more recent. Munce says that’s because there has to be a strong investment community in a country before IBM wants to step in. 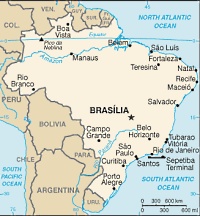 The local investment scene is indeed growing rapidly, between expanding old-line firms like FIR Capital and Mercado Ventures and small new venture firms. Munce says that when she attended the same symposium two years ago, there were 50 attendees; this year, there were over 400, including delegations from US firms like Draper Fisher Jurvetson and Trident Capital that accompanied her.

Like the markets in China and India, Brazil is growing rapidly to meet the needs of its population — with over 187 million people, it’s the fifth most populous nation in the world. Some segments, like mobile services, are experiencing even faster growth than China. “In the 11 years I lived there I don’t think I had a phone,” Munce recalls of a period of time she spent in Brazil, earlier in her career. Now, she says, every child has a mobile phone.

The new investment atmosphere is reflected in the LAVCA report, which gives Brazil top scores for friendliness to investors and entrepreneurs. However, Brazil has an unusual characteristic in its relative dearth of large corporations (IBM notwithstanding). “The country is dominated by small and medium-sized businesses,” says Munce. “It’s very new for Brazil to start companies with an eye on a larger scale, and a broader market beyond Brazil.”

However, market demand is quickly changing that equation. Although mobile and IT are obvious areas for investment, several others are also booming. One of those is, oddly enough, investment banking software. “It’s some of the most sophisticated in the world, because for decades the monetary fluctuations in Brazil were second to none; you could be rich in the morning and poor in the afternoon. It was almost a survival skill,” comments Munce. Today, that “survival skill” could be turned to managing other markets.

Another area is cleantech, specifically biofuels. Brazil has had a developed biofuel industry for over a decade, built atop its sugar plantations, so the country’s businesses are well experienced in tackling issues, like fuel transportation, that companies in the US and elsewhere are figuring out for the first time. That could give an opportunity for new service and distribution firms, such as already exist for the oil industry, separate from the companies that do production and refining.