Microsoft just wrapped up its “Silicon Valley Road Show,” a showcase for some of the most interesting tools and toys created by the software giant’s research teams.

I can’t do justice to the variety of products on display, so I’m going to focus on three that are particularly new, particularly innovative or particularly cool: 1) an affordable technology for surface computing, 2) a game designed to teach kids the basics of programming and 3) a more intuitive interface for tablet PCs.

The biggest news was probably the previously unannounced LaserTouch (pictured below), which uses a camera and two lasers to enable a “surface computing” interface on virtually any flat screen. The idea, said Researcher Andy Wilson (who also helped create Microsoft Surface), is to build a more affordable, flexible surface computing tool — Wilson estimated that LaserTouch should cost “an order of magnitude” less than previous offerings. 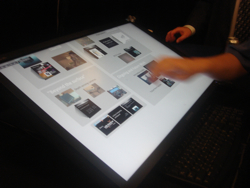 Other than LaserTouch, most of the other products at the RoadShow have already been written about, but this was really a chance to get a hands-on look at the technology in action.

My favorite demonstration was of Boku, which is billed as a “lightweight programming language for kids.” It’s basically a graphical interface that kids can use to design little games. At the simple end of things, there’s an in-game robot who can be programmed, for example, to eat all the apples in an area, or to follow another character. At the same time, Boku is capable of creating more complex environments with crazy physics and characters whose routines change over the course of the game.

Someone pointed out that Second Life, the virtual world created by Linden Lab, also has a programming language, but Program Manager Matthew MacLaurin responded that in terms of difficulty and the type of “mature” content that’s allowed, the Second Life language is really aimed at adults.

Boku, on the other hand, is being tested among nine to 12-year-old kids. From what I could see, it’s really intuitive and well designed, so someone can get a simple game up and running quickly but can also discover more depth as they continue exploring. Boku can also work as a platform for people of all ages to create games and share them on Xbox Live.

Boku should be available in early 2009, MacLaurin said.

I was also quite impressed by the demonstration of InkSeine, an interface for tablet computers (pictured below). InkSeine works as a digital notebook that users can write in during meetings and other events. InkSeine redesigns many of the standard elements of the computer interface to make them more convenient for a digital pen-and-tablet — instead of scroll bars, you just make a circular motion to scroll; instead of drop-down menus, different options are presented as a radial menu encircling your pen. 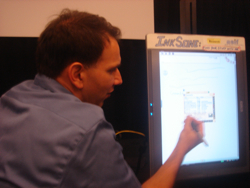 There are some other unique features, such as taking a note that you made in InkSeine and searching for that term on your computer. The team also just added the ability to automatically transfer photos taken with a wireless-enabled digital camera onto your tablet, so that you could, for example, put a photo of notes on a whiteboard into your own notes.

We’ve covered several digital pen startups, including audio-enabled Livescribe, but InkSeine is more about the environment in which you use that pen — basically a different take on Microsoft OneNote. (Startup Zoho offers a competing product called Zoho Notebook). InkSeine’s designers have made some smart choices with the interface, and I liked the demonstration enough that if I ever shell out for a tablet PC (unlikely, at least in the near future), InkSeine is definitely the note-taking environment that I’ll try out first.

Before the demonstrations, Rick Rashid, the senior vice president of Microsoft Research, gave a short speech about the company’s different areas of research (there are a lot). It was mostly information you can find on the Microsoft Research website, but I liked how Rashid articulated the main reason why basic research is important. It’s not because research can lead to profitable, innovative products, he said, although that’s a nice consequence.

“The reason you do basic research is for survival,” Rashid said. “It’s to give you the ability to change when change is critical.”

Now might be one of those times when change is needed — we’re hardly the first to have argued that as more and more computing moves online, Microsoft’s traditional software model is in trouble. Rashid alluded to that himself when he started listing some of the “really bad” events that can force a company or a society to evolve — “a war, a famine, Google.”