When you’re a new blogger trying to build traffic, you’re up against incredible odds. First, unless you’re writing about the intimate details of your personal life (and sometimes, even if you are) there’s a solid chance that other people are writing about the same thing. Second, they are probably doing a better job. The rote wisdom is that in order to build traffic, you need to build community, and one of most frequently cited ways to do this is to link to other blogs. Not only does citing other sources raise the likelihood of reciprocal linking, it is a good way to reflect your authority. Problem is, finding relevant material can be a serious pain in the ass.

Zemanta, a company based in London and Slovenia, thinks it has an answer: Blog and article suggestions, delivered in real time, as you write your blog. When it launched in March, Zemanta was a Firefox plug-in, which makes for a useful but limited distribution channel. Now, the company is moving its product to the server-side and is available as plug-ins for the WordPress, Moveable Type, and Live Journal platforms themselves. It has also significantly expanded the reach of its index, and now includes over 400 news sources and 1,000 major blogs. It can use an Amazon.com affiliate account to automatically create monetizeable links to books and CDs.

It has the potential to be a terrifically useful service. Every 300 words, Zemanta analyzes the content of your post and, in a sidebar, recommends relevant articles, blog posts, images from Flickr, and videos from YouTube. Clicking on a blog or article adds a link to it with the title, to the body of your piece. Images and videos get pasted in with a credit to the original source.

A few years ago, a company called Intellext released a similar product, called Watson 2.0. Unlike Zemanta, Watson 2.0 recommended content as you wrote a Word document and, despite impressive technology and a distribution deal with Microsoft’s desktop sidebar, never got off the ground. It probably didn’t help that it charged a subscription fee. Adaptive Blue’s SmartLinks deploy a somewhat similar capability, using semantic analysis to turn a blog’s links to wine, books, movies and various other products into rich data sources, suggesting multiple links from which to get more information.

By combining these capabilities into real-time content recommendations, Zemanta takes an original and possibly more useful approach than both of these services. The company has raised $1.5 million and hopes to make money using the affiliate model. 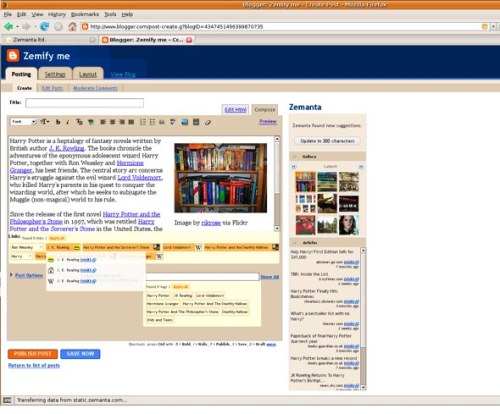