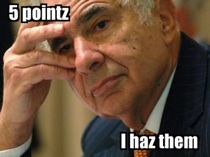 The back and forth between Yahoo and billionaire investor Carl Icahn, who is attempting to take the company over, is now arguably more entertaining than the formal letter wars during the whole Microsoft/Yahoo debacle.

Icahn recently got FTC approval to purchase a huge amount of Yahoo stock, putting him one step closer to a hostile takeover.

This morning, Icahn sent a letter to Yahoo laying out five steps of what he plans to do with the company upon a successful hostile takeover:

In summary: Icahn would eliminate one of the main deterrences that stopped Microsoft from taking over Yahoo. He would then push Yahoo chief executive Jerry Yang aside and replace him with clone of Google chief executive Eric Schmidt. (He would allow Yang to stay with the company as a cheerleader.) With steps three and four, Icahn would then beg Microsoft to come back to the table. And finally, if a Microsoft deal wasn’t immediately possible, he would be okay with the Google/Yahoo search advertising deal back up plan — until Microsoft eventually came around again, at which point he would kick Google to the corner.

This all sounds great except that it relies upon the willing submission of at least a half dozen other parties who would have to do exactly what Icahn wants.

This isn’t a game, but Icahn is almost making it seem like one. It’s like fantasy CEO. Yang isn’t working out so lets replace him with a five-tool chief executive like Schmidt. Come on, we can totally get him, we have a high draft pick.

We saw Yahoo respond this afternoon with a much shorter letter:

Leaving aside Mr. Icahn’s inaccurate interpretation of our retention plan, we again note that he has no credible plan to operate Yahoo!. We believe that Mr. Icahn’s suggestion that we cancel our retention plan would have a destabilizing impact on Yahoo! and would clearly not be in the best interests of our shareholders. Furthermore, his suggestion that we put out a price publicly to see if Microsoft will alter its stated position is ill-advised. As we have stated numerous times publicly and privately, we are shareholders.

In summary: Icahn is crazy.