We all know that the iPhone’s brilliant interface has changed the game. But let’s face it: while we’ve learned to deal with the touch-based keyboard on our iPhones, typing in messages is an inelegant process that is often executed with total disregard for the surrounding world. Some people (myself included) walk down the street while texting, pulling up directions on Google Maps, or updating Twitter. Some even send text messages as they drive. And so while touch has become a wonderful way to maneuver around a phone, it’s not always the ideal way to go.

A Charlotte, North Carolina-based company named Yap wants you to use your voice, instead. Yap, which just raised $6.5 million in its first round of financing, is a speech-to-SMS company whose technology lets you send texts to your friends without typing, post updates to Facebook and Twitter, and so on. Unlike speech-to-text services like Jott (our coverage) and PhoneTag (formerly Simulscribe), which employ humans to translate voice messages into text, Yap is entirely automated. See sample screenshot below. 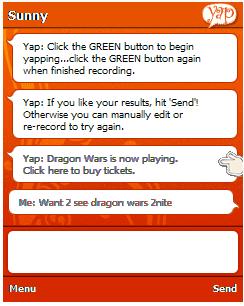 On top of building its own speech-to-text applications, the company has opened up its platform to third-party developers and will license its technology to companies that can find interesting ways to deploy speech-to-text. By becoming a platform, the small company is entering into competition with some established players. The most famous of these is TellMe, a voice-recognition company that raised about $263 million before Microsoft bought it for around $800 million last year. The other is Nuance, which has a similar capability and has its applications on over two billion phones. Yap’s co-founder, Victor Jabolokov says his company has an edge on TellMe because, unlike TellMe, which requires adherence to grammatical forms, Yap can turn free-form speech into text. As for Nuance, which he sees as the bigger threat, Jabolokov says that the smaller company’s agility will let it tackle parts of this market before its larger competitor can lumber its way in.

The really big opportunity is not limited to speech-to-text. Despite the wonders of the iPhone, the killer interface for mobile that Jabolokov envisions will incorporate voice, translating your commands into search queries, pulling up calender appointments, setting a course for your GPS, and activating essentially any application on the fly. Jabolokov says this is the goal, but considering TellMe, Nuance, and Google probably have their eyes on it, managing to get there will be seriously tough.

However, there are hundreds of millions of SMS messages flying across the wire all the time, and getting a respectable piece of that will more than justify the investment. SunBridge Partners led the round, which included Harbert Venture Partners, Pittco Capital Partners, and existing angel investors.

[Editor’s note: If you’re interested in mobile innovation, be sure to check out MobileBeat2008, VentureBeat’s conference on July 24]