Coincidence, or just intense competition? Two auto-related sites, RepairPal and DriverSide, have launched within a week of each other, and they do something very similar.

They aim to add a type of information to the Internet that so far hasn’t made it on to any website, or even the public domain: Solid, reliable estimates of the worth of your vehicle, as well as how much it will cost to keep it repaired and running.

DriverSide, based in San Francisco, launched first, going live with its beta last week. Its focus is broad: The site promises to help you buy and sell cars and parts, learn how much repairs cost, see how much it’s worth, and network with other users to learn more.

RepairPal, next door in Emeryville, is launching this morning with a narrower focus. It just wants to help you fix your beater (or fancy BMW). If the repairs aren’t worth the money, it might help advise you in selling your car and getting a replacement, but the focus is on maintenance.

Why are these sites notable? For starters, the auto market is enormous, but there’s so little reliable information that the sleazy (or honest) mechanic has become a cultural archetype. From personal experience, I know it’s possible to spend hours searching for details on a single repair, even on a common car. On either of these sites, the process will take five minutes, at most.

The key is bringing to light the trade information, kept by only a handful of companies, that mechanics have worked with for years, according to RepairPal co-founder David Sturtz. That information covers costs for the multitude of parts on the market and the time required to do a repair. On top of that, the sites have to estimate costs based on geographic area — a shop in Savannah should probably be cheaper than San Francisco.

That covers the basics of both sites. Comparing them is trickier — with both having just launched, numerous flaws in their data are likely. But from my testing, it appears that DriverSide, despite a somewhat more mass-market-friendly interface, has more distance to travel. With hundreds of repairs possible on any one of thousands of existing car models, this is a real data game; and RepairPal simply lists far more results.

DriverSide also failed to work correctly on a number of points, including not being able to load any estimates at all for the ’96 Dodge Neon I used to own. But there’s a deeper difference between the two sites. Where DriverSide simply tosses out a firm number — $267.50, say — RepairPal takes a more thoughtful approach, providing an estimate range heavily modified by a number of factors, including region and whether you’re visiting the dealer or an independent shop. 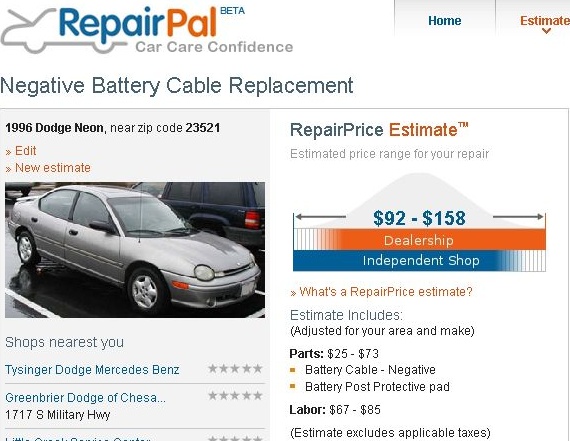 Despite the differences, there may well be room for both sites flourish. DriverSide’s broader view speaks to the automobile neophyte — car-grease phobics who just want a bright, well-designed site to poke through. RepairPal speaks more to the cautious consumer, who wants more in-depth information, and doesn’t mind making a judgment call. And both sites are very well positioned for both search engine placement, to bring in traffic, and targeted advertising from car manufacturers and others.

RepairPal, the site launching today, has taken a large round of seed funding. Sturtz says the company will probably start looking for a venture round in about a month.