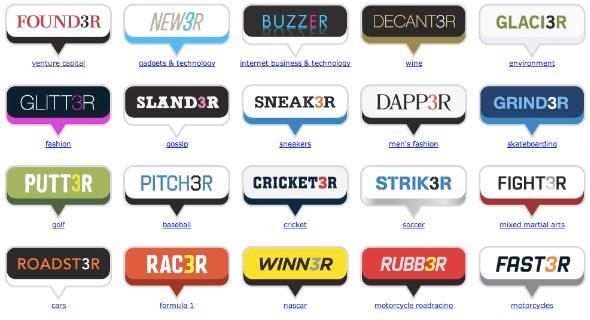 What if there was a news aggregator specifically geared to your favorite topic — a site like automated news aggregator Techmeme, only tailored to what you care about. That’s the basic premise of a company called Loud3r, which is launching niche news aggregator sites for a wide range of categories, from venture capital to movies to TV to sports.

As you’ll note from the Andy Warhol-esque screenshot above, the company has bought many domains (more than 500) using various derivations of “-3r” and is launching a topical site for each. So there’s “Found3r,” “Watch3r,” etc. Clever.

An editorial staff figures out hundreds to thousands of sources for each niche. The company’s software also uses what it calls a “semantic glossary” of words and phrases to figure out how articles are relevant to particular topics. Finally, an algorithm determines what content is most interesting based on editorial and semantic definitions of quality, relevance, and other information.

The site also has some social features. You can create a unique account then do things like comment on posts with other users and follow them to get updates about what they’re commenting on. Stories can also be flagged as inappropriate and removed from the site.

A good sign for the Los Angeles-based company: Four Loud3r sites are in private beta and have together gained more than 50,000 monthly unique visitors, the company tells me, adding that the majority of traffic has come through people telling each other, links from blogs, and other forms of grassroots marketing.

However, there’s been a long line of software-driven news aggregators that have risen (and in Technorati’s case, fallen) over the last few years, and that’s not to mention sites driven by user votes, such as Digg and Reddit and their copycats.

Nevermind if news aggregation is even a big businesses. Only Techmeme and Google News seem to have become significant automated news aggregators. And the reasons those have succeeded may not be in Loud3r’s favor.

Techmeme is constantly tuned by its creator, Gabe Rivera, to ensure against things like a blog gaming the system and getting its lame stories featured over others’ good ones. It has also become a sort of watering hole for tech-blog conversation. An appearance on Techmeme is a status symbol for bloggers.

Google News, meanwhile, gets its traffic from Google users looking for news stories and is the go-to place to search millions of news stories fast.

Loud3r lacks the fine-tuning and community of Techmeme and the search might of Google. So what does it have? 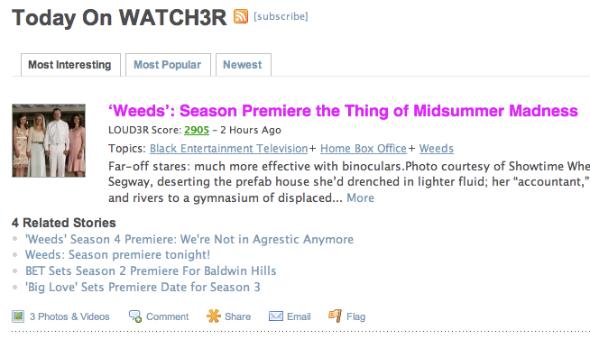 The most intriguing part of Loud3r’s scattershot strategy is that it will find communities not already served by aggregators, that also want one. However, even Techmeme’s sister sites, like political news aggregator Memeorandum, have seen more limited success. Maybe political reporters and bloggers don’t care about news aggregation as much as some TV watchers might?

And maybe the “3r” cross-branding will help people to recognize the Loud3r concept and share various news aggregators with friends and family, based on interests.

The company has taking funding from friends, family and angel investors.