We can all watch live video broadcasts on the internet thanks to content delivery networks (CDNs), which set up strategic points online where they can send streams of videos to internet users as efficiently as possible without clogging up the entire web.

But Andolis, a San Francisco startup with French roots, hopes to disrupt that business with a product called DaCast. It uses technology that can do the same thing as CDNs much more efficiently and inexpensively. Stephane Roulland, chief executive of Andolis (pictured here), said that the company is capitalizing on peer-to-peer technology to share videos. Dacast and an invitation-only “alpha” version of it will soon be available at Dacast.com.

Live multicasting today requires a private network where companies such as AT&T broadcast live video to consumers over its U-Verse IPTV video service. But such technologies don’t work well on the live internet, where delays in moving video pretty much wreck the service quality.

Roulland said that his company has created a working peer-to-peer multicasting system that can broadcast live streaming video to anyone on the internet using very little bandwidth. It can receive incoming video of any format but distributes video using only the H.264 video protocol.

It works by finding a “tree” of friends that you can share a video connection with. You can share a video with one person directly and another person as a backup. Both of those friends share it with two of their friends, building a tree of connected friends until everyone can access the video. If one friend disconnects or has a choppy connection, the software automatically seeks out the backup. Roulland says the result is reliable, live streaming of video. 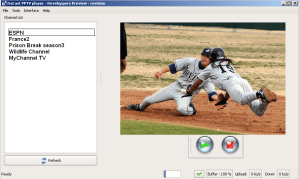 The company has just six employees and licensed the technology from a U.S. university (which Roulland won’t name). Roulland, a serial entrepreneur who has worked in streaming video companies for almost a decade, financed the startup and is now looking for a first round of capital. He previously ran LOFTV SA, a series of entertainment web sites. The company was sold in late 2005 to French CDN Ipercast.

Roulland said he’s in discussions with content delivery networks (such as Akamai) for possible partnerships. CDNs have networks that are more expensive because they involve centralized servers for distributing the video. DaCast’s beta version will be available in August on Windows XP and Windows Vista. Mac and Linux versions will come later.

The company has integrated an ad tool into its software to allow it to push video ads onto the network. Hence, Roulland hopes to make money on DaCast through advertising. He may also license the service to other companies.

One CDN player I spoke to said he is skeptical of peer-to-peer content delivery and will believe it when he sees it. Competitors of Andolis include makers of mesh networks, such as Rawflow, Abacast, Octoshape, Rinera Networks, and Gridnetworks. But Roulland said that those companies have significant delays and don’t save as much on bandwidth costs as his technology.