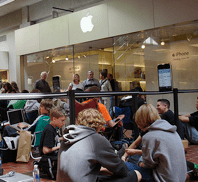 Are you going to buy an iPhone 3G on July 11, launch day? If so, how long are you prepared to wait?

A bit of information that started circulating after the WWDC launch of the iPhone 3G was that AT&T and Apple would now require buyers to activate their new phones before they left the store. The thought is that this would help curb the rather large problem the companies had during the first generation of the product with people buying the device, never activating it, and instead unlocking it to use on other networks — and often in other, non-supported countries.

While some people expressed displeasure over this heavy-handed move to ensure carrier lock-in, the other very real problem with this idea was that it would make the lines on the iPhone 3G launch day exponentially longer.

Even in best-case scenarios, in-store activation would add at least 10-15 minutes to each purchase, and that’s if the process runs like a well-oiled machine. “Launch day” could quickly turn into “launch week.”

But new reports indicate that this might not be the case. A leaked internal AT&T Mobility memo suggests that users might be able to pick a new plan and sign an agreement online prior to launch day and then show up with a code they are given to buy the new iPhone.

Another possibility is that the stores could allow you to buy the iPhone 3G, sign the 2-year agreement with AT&T and then go home to actually activate the phone. This would work because Apple or AT&T (depending on who you buy from) would note the device’s IMEI number to keep track of all iPhones sold, according to Mobile Magazine.

Both of these ideas go against what Ralph de la Vega, president and chief executive of AT&T Mobility, said following the recent unveiling of the new phone. “The way that these phones are going to be sold is that they are going to be activated in the stores,” de la Vega said.

So which is it? We’ve contacted Apple for clarification, but the company is still keeping silent on the process for the time being.

If customers will have to activate all iPhones in-store, I’d bring a book to launch day — or several. Otherwise it should be relatively smooth sailing like last year.