Trading is down on the Nasdaq right now, but one company listed on it has seen a large upward spike since about noon Eastern Time: Yahoo.

With the stock up just over 8 percent now, commenters on the discussion boards are confused. “Any idea why YHOO is up?,” one asks. “Just asked the same question. Did somebody or a company buy a big chunk?,” responded another.

With no major announcements or news out there, as I see it can only be one thing: Rumors that Microsoft is interested in making a deal with Yahoo. Yes, again.

The talk started yesterday with word that Microsoft was pursuing buying Yahoo’s search business once again, a source told CNET. The rumors go one step further today, with talk of Microsoft holding discussions with Yahoo once again about an offer to buy all of the company, reports TechCrunch.

Is there any truth behind these rumors? It looks as if Wall Street thinks so.

Yahoo’s stock started the day threatening to go below $20-a-share, and now it’s hovering around $23-a-share.

Officially, neither side is commenting on the matter.

update: Almost as soon as the stock passed the $23-a-share mark, a huge selloff started taking place. Perhaps shareholders are thinking they’re not likely to see that kind of price again anytime soon? 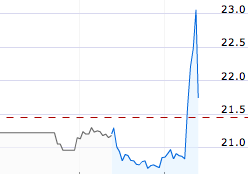