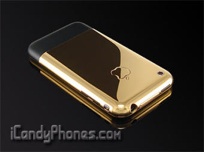 The iPhone 3G gets all the buzz, but I’m arguably even more excited for the 2.0 version of the iPhone software. It’s what will enable both old and new iPhones (as well as the iPod Touch) to use the new third-party native software applications obtained through Apple’s upcoming App Store.

As soon as this Friday, the 2.0 software could achieve “Golden Master” status, according to Gizmodo. This is tech jargon meaning a piece of software is finished and ready for release.

While the software may be done a full two weeks before the launch of the iPhone 3G, unless you’re a developer, you’re still going to have to wait for its release in July. Although I’m sure some enterprising young person may find a way to spread it a bit early. Since I’m getting a new iPhone, I don’t mind using my current one as a testing ground of sorts.

I’ve played with builds of the 2.0 software on some of my developer friends’ phones and it looks great. The ability to bulk-delete emails is worth the price of admission alone for me.