The third-largest video site in China, 56.com, has been offline for nearly a month due to what most observers believe is government censorship. But that’s not stopping rivals from raising more funding.

Youku, approximately tied with Tudou as the largest video site in the country, has just closed a $30 million round led by private equity firm Maverick Capital, with participation from existing venture and private equity investors.

A much smaller rival, called ku6.com, has also raised $30 million from undisclosed investors, according to Pacific Epoch. 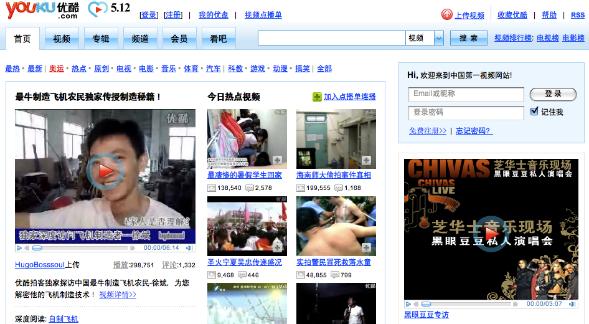 Neither Youku (homepage screenshot, above) and ku6.com appear to be at serious risk of being shut down due to censorship. The Chinese government introduced a new regulation last winter that required all online video sites to receive a license to legally operate that requires they be at least half-owned by a government entity.

Ku6 and many other smaller online video sites have received approval but Youku, Tudou and 56.com haven’t.

Youku has close connections to powerful media companies and investors in China. Besides an hour’s worth of downtime a month ago, it hasn’t had any issues, and most expect it to stay on the right side of local laws. Likewise, Tudou may be safe, according to one report, because it voluntarily went offline to clean objectionable content for a day in March, after being approached by government censors. Meanwhile, 56.com is still offline — some rumors of its shut-down included that it was showing videos of the recent Chinese earthquake that the government didn’t want to be public and that it was too slow to respond to government take-down requests.

Ku6.com (homepage screenshot, below) received a $10 million from investors including Chinese internet conglomerate Baidu, Draper Fisher Jurvetson and DT Capital Partners in May of 2007. The company also raised another round sometime at the end of last year, separate from this latest round, according to Pacific Epoch. 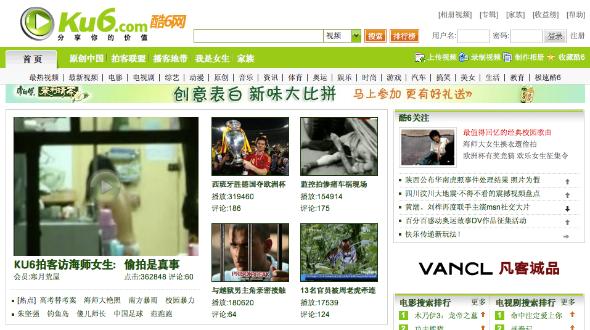 Youku has raised a total of $50 million, including $10 million in debt, prior to this latest round, bringing the total raised to $80 million — near what Tudou has also raised. All existing investors in Youku participated in the round — showing the level of confidence everyone seems to be feeling despite the 56.com shutdown — and including Brookside Capital, Sutter Hill Ventures, Farallon Capital, and Chengwei Ventures.

Youku, like Tudou, claims to be the largest site in the country. Citing third party reports from Chinese web measurement services like iResearch, Baidu user index and Data Center of China’s Internet, and others, Youku has says it is getting more than 100 million unique visitors per month with each user spends about 300 minutes per month on the site — although many in China questions the validity of third party data tracking in the country.

Also, operating a video site is expensive, anywhere. We’ve previously heard that Youku and Tudou are spending more than one million dollars per month on video infrastructure costs, so this funding should be enough to last them for more than a year as they continue to figure out sustaining business models. Youku’s funding today will also be used to build out its sales and marketing team, to help it start making more money, the company says.

With censorship out of the way, maybe, for most Chinese video sites, the twin issues of web traffic measurement and online video monetization are the monsters left for these companies to slay. Both are still large and unresolved problems in the Chinese internet world.