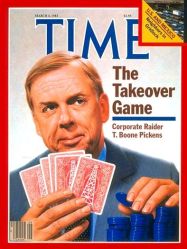 When investing, it helps to have people on your side. Usually that means other business people, and sometimes regulators, but billionaire oilman T. Boone Pickens is taking the sentiment to a new level with a just-announced public campaign aimed at bolstering domestic power sources.

The multi-million dollar media and advertising thrust by Pickens will attempt to swing common opinion away from foreign oil, and toward alternate energy investments –- which includes wind power, as well as natural gas for transportation.

Pickens, who made his fortune in oil and private equity, is the man behind plans for the world’s biggest wind farm, a risky play sizable enough to significantly multiply or divide even his ample assets. For a big win, he needs the support of the government to help build supporting infrastructure –- hence the big move.

The idea is intriguing, because although the root of Pickens’ fortune is in oil, he’s throwing his weight behind renewables. And he’s doing it during an election year. While John McCain spends most of his time talking about nuclear energy, which Pickens says will take “too long”, and offshore drilling, Barack Obama vocally supports all cleantech (including biofuels, which the World Bank appears ready to blame for sharp increases in the cost of food).

Though Pickens clearly has the most interest in wind, his rhetoric is centered around weaning the country off oil, which will take solar, biofuels and many other initiatives – making a clear match of his message with Obama’s.

It should be interesting to see how the energy debate plays out. Pickens isn’t the only one talking up clean energy. Al Gore’s $300 million awareness campaign about global warming just got underway, and the rest of the world is spending more time talking about the issues every day. The claim is that the ad campaigns are bipartisan, but in the current race, they seem to favor the more progressive Democrats — whereas Pickens himself has delighted in bedeviling Dems, including former presidential candidate John Kerry.

Cleantech as an investment sector is still picking up speed – the Cleantech Group this morning reported another record quarter, with $1.5 billion invested in green technologies in the United States alone. If Gore, Pickens and others get their way, there will be another flood of investment at all levels. The only question is, how high can the tide go?