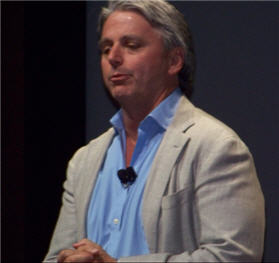 John Riccitiello, chief executive of Electronic Arts, took the stage for the first time at an E3 press conference. Then he did something unusual. He relinquished the stage to his game developers, who proceeded to talk about their titles. Sitting just behind me was Mike Gallagher, the head of the Entertainment Software Association. Gallagher was telling me how much he admired Riccitiello, or JR, before the EA press conference started. Riccitiello could have done what Microsoft’s execs did, which was hog the stage. He didn’t even take a jab at Take-Two Interactive, the company that EA is trying to take over, as I’ve previously reported (their offer expires Friday, by the way). JR proceeded to step into the background and let his people shine as they showed off a dozen big new titles.

You could say that EA showed how it spans everything from cute to horror. It started with the tame game, Sim Animals. It’s a version of The Sims, but with nothing but cuddly little creatures. You can play with them and put them into tough situations, like a bear and a fox together. It wasn’t the most impressive title. But it shows how EA is buying into the notion that games for the Nintendo Wii are expanding the market beyond the hardcore. This title will debut in January 2009 for the Wii and the DS. That demo led to a film of “The Sims 3,” which is coming in 2009. There are big dollar signs for that title, whose predecessors have sold more than 100 million units since 2000.

Then came the horror in the form of DeadSpace. EA’s Glen Schofield showed off this game where your typical mission, as a lone space soldier on an alien-infested space station, is “strategic dismemberment.” You have to shoot out the right parts of the aliens as they try to tear you to pieces. There are gushes of blood in this one. Here is a link to the DeadSpace video (warning: bloody).

I won’t mention most of the titles, since they’ve been talked about before. I was impressed with the gritty game play of Mirror’s Edge, where you play a courier heroine who jumps from skyscraper to skyscraper in a world where all communications are monitored. The “running cam” view shows what you see when you jump off the edge of a building.

Will Wright stole the show as spoke about his newest creation, “Spore,” the much-awaited title debuting September 7. Wright, the creator of “Sim City” and “The Sims,” is banking on users to help create his next big hit. EA released the Spore Creature Creator, a tool for creating custom creatures in the upcoming game, in June and expected maybe 100,000 creatures to be created by the time the game debuted. But so far, more than 1.76 million species have been created by gamers and uploaded to the Sporepedia. Wright pointed out that was more than the 1.5 million species on Earth.

He noted that Spore fans have uploaded more than 85,000 videos of their Spore creatures to YouTube. The uptake on that feature isn’t quite as popular as the Sporepedia/Spore Creature Creator itself. Nanea Reeves, senior VP of EA’s online group, noted that EA is stepping into the waters of microtransactions, where you pay for little things in a free game, with the launch of “Battlefield Heroes.” You can, for instance, dress yourself up in your own unique way as you try to mow everyone else down. Here is a link to Will Wright’s talk.

Sean Fanning, the cofounder of Napster, talked about Rupture, which EA recently acquired. He thinks that gamers will want to use the Rupture service as a social network. They can subscribe to their friends’ profiles and then track their gaming habits. Games on the iPhone made a small appearance, with Travis Boatman (VP of Worldwide Studios at EA Mobile) saying that the games take advantage of iPhone features such as the accelerometer, which senses motion. In Scrabble, for instance, you can shake the iPhone and it scrambles the letters to help you come up with words from a set of letters.

The line-up was good. But perhaps the biggest coup came from a partnership deal, where EA will publish the newest game, “Rage,” being developed by Mesquite, Texas-based id Software. John Carmack, the graphics guru at id and co-creator of such games as “Doom,” came on stage to show off Rage. He’s arguably one of the biggest technical talents in the industry and here he was praising EA. That made a bigger impression than anything JR could have said.