Opposing Views, a discussion site that brings experts from opposing sides together to explain complicated issues, is now open to the public.

I first heard of the Los Angeles startup when it announced raising $1.25 million in June. At the time, founder Russell Fine was full of exciting promises, but a lot of his description was kind of vague, and his background as co-founder of horse-racing site Youbet.com seemed like an odd fit. Now, however, I’ve had a chance to look at the site, and I like it a lot.

Fine’s basic premise is that the best way to help people understand complicated issues — for example, the economy, the death penalty or global warming — is to have respected experts in the field debate each other. Okay, so that doesn’t sound too different from what you can find on almost any online discussion forum, and the concept is also similar to publishing “pro” and “con” op-eds on a newspaper opinion page. Where Opposing Views stands out is in the quality of experts that it’s already attracted, and in its well-designed interface, which makes it easy to get an overview of each side’s argument, then to drill in more deeply.

Every Opposing Views discussion is structured in the same way: There’s the initial question, then the bullet point “reasons” for each argument. Once the user clicks on a bullet point, they see the full write-up of that reason, plus any supporting evidence the experts care to provide. The structure is a bit reminiscent of televised debates — each side also has a chance to object to any and all of the reasons, and to respond to those objections. 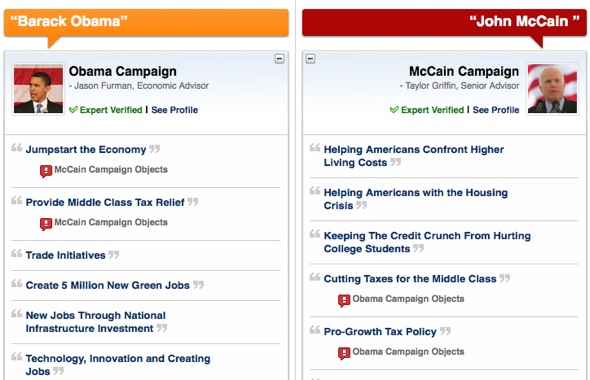 Fine has already published discussions from some impressive experts — regardless of what users think of, say, the National Rifle Association or the Sierra Club, there’s no denying that these aren’t just random people writing long arguments from their basements but rather well-known organizations in their respective fields. And, yes, the site is launching today with a discussion between economic advisers to Barack Obama’s and John McCain’s presidential campaigns.

The Obama-McCain discussion is a good showcase for both the virtues and the shortcomings of the site’s approach. The initial arguments read a bit like position papers from the candidate’s Web sites, and indeed the main “evidence” provided by the advisers are, respectively, an Obama position paper and a YouTube video of a McCain speech. Still, even if these are arguments you can find elsewhere, the Opposing Views format does a good job of breaking them down and making them easy to parse. And when the two sides object to each other, then things get more interesting and substantive, with more statistics and links getting rolled out.

The site will make money from a combination of advertising and syndication, Fine says. And while Opposing Views is currently heavy on political discussion, Fine plans to expand to other areas, too, including health, money and religion.