In expecting that it can overcome the power of human laziness, the Boston, Mass. startup Second Rotation, which is rebranding today as Gazelle, is certainly setting the bar high for itself.

Every gadget’s life includes three phases: First, it is a shiny new toy, the object of constant attention. Next, it becomes a workaday standby, used but rarely thought about. Finally, it is tossed into a drawer in favor of a next-generation device, there to be forgotten. Gazelle hopes that it can reach into those drawers, pulling out the value.

The idea to make it easy to resell old devices. Auctioneer eBay was founded in part on the expectation that people would instead sell their unused items, but statistics show that few bother. Auctions seem easy, but are an annoyance to set up, at least for average people. So Gazelle is predicating its business on what its COO, Israel Ganot, described to me as the Netflix model.

Selling an item through Gazelle will take only a few steps. Visitors to the company’s website will find a streamlined search process by which they can locate their device model, whether it’s a cell phone, MP3 player, laptop or other gadget. After inputting the condition it’s in, the site will either give a price for the item or offer to recycle it, if it looks worthless. 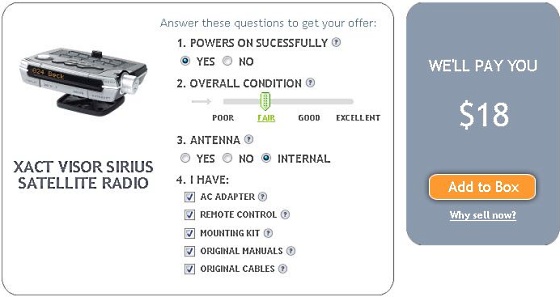 Once you’ve agreed, Gazelle sends an empty green box with its own name prominently displayed, and shipping label included. Put in your device and send it back, and the company will examine the offering to see if you told the truth about the condition. If you didn’t, they’ll send it back, again with free shipping.

If the item was, indeed, in whatever condition you said, Gazelle will put it up for sale on — where else — eBay, where the company still operates as Second Rotation.

According to Ganot, the user only loses about a third of the total price of the item, which is not that bad a trade-off for something they probably wouldn’t have ever sold anyway. (I’m the perfect example, with an assortment of used laptops, phones, speakers and other paraphernalia scattered about my home.) And by offering free recycling for all the item categories it buys from, the company also helps the environment.

The question is, even once Gazelle has made it easier for people to get rid of their items, will they bother doing so? The plan isn’t without precedent. Flipswap, for example, has made a business of taking in aging cell phones. There’s also TechForward, which asks people to pay for a buyback plan that guarantees a predictable depreciation for their items.

Second Rotation has so far bought items from thousands of users, Ganot says. But Gazelle is hoping to build a multi-billion dollar company on the expectation that millions of people will come to associate its name (“Don’t sell it, Gazelle it!”) with getting rid of old stuff. Ganot’s hoping to be bringing in at least 100,000 devices per year, within a year from now.

Unfortunately, there’s no way they can ever make sending in items any easier than simply forgetting about them. And the lower the price, the more likely that result is — see the picture above for an example. More than anything, Gazelle will be aided by a good advertising campaign, one with a healthy dose of guilt included (after all, you’re eventually going to send all those old devices to the landfill).

Gazelle took its first funding, $4.4 million from Venrock and angel investors, back in January. The company will likely be on the prowl for more in 12-18 months.