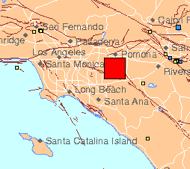 This morning a 5.4 magnitude earthquake struck Southern California near Los Angeles. Well before the information was anywhere on the major news outlets, tweets (Twitter messages) were flowing in at a rapid clip. I say again, events such as this showcase the power of the micro-messaging service Twitter.

When natural disasters strike, people want news ASAP. Twitter is simply very fast at disseminating information. We saw this when a large 7.8 earthquake struck China back in May and we’re seeing it again today. Today, it was especially true when used in conjunction with the social conversation and aggregation site FriendFeed. Minutes after the quake, I had various accounts of it and maps of its epicenter.

Twitter’s new search site (formerly Summize) is also an incredible tool for getting information. It used to take a little while for information on these events to trickle down depending on who you were following on Twitter. 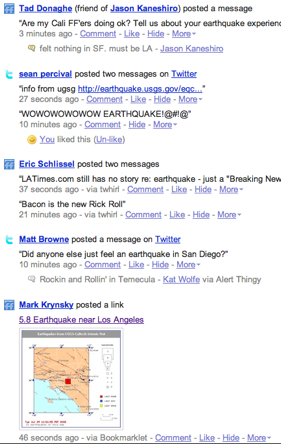 Now you can simply open Twitter Search and do a query for “earthquake” and get thousands of results. Within minutes of me opening the site up, I was alerted that there were already hundreds of updates on the earthquake — the information was coming in fast.

It takes reporters time to set up and get the story, but Twitter turns thousands of regular people into citizen journalists — all of whom are on the scene. Of course one has to worry about the spread of incorrect information, especially in the time of a disaster, but the sheer volume of tweets allows for the truth to come up.

Many people only like to talk about Twitter’s monetization strategy or when it will hit “mainstream” usage. Throughout all of this the most important fact remains that Twitter is useful. As long as it stays that way and can maintain (or achieve depending on the week) reliability, the rest of that will come.

Update: The so-called “video Twitter” site that I’ve written up a couple of times, 12seconds, also has a user, PodGen, with supposed (see the comments) video footage of the quake from the 36th floor of an L.A. building.

Update 2: The 12seconds vid was fake, posted after the fact, a co-founder of 12seconds confirmed.

Update 3: Twitter itself is now weighing in on the earthquake and Twitter’s role in spreading the news. Twitter co-founder Biz Stone notes that the AP pushed out its first wire item on the news 9 minutes after people were already tweeting about it on Twitter. The first tweet about it came mere seconds after the earthquake started.

Check out the chart below. 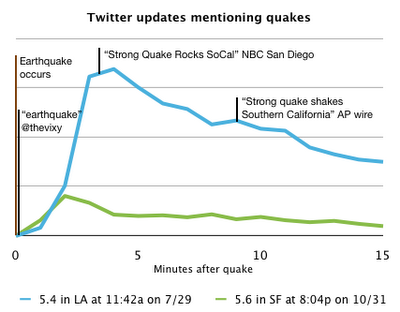