When developing its new iPhone and iPod Touch application, online event tracker Eventful had a good idea: Don’t port the entire kitchen sink over, port only the most core features needed to make a good application. It worked.

Using the new iPhone 3G’s GPS chip (and the old iPhone and iPod Touch’s triangulation-based location sensing ability), the Eventful application locates where you are and tells you what events are around you. Most of the events you’ll find will be concerts, but there are others as well, including political events and group meetings. The idea is to make Eventful a thriving ecosystem for event discovery of all kinds, Eventful founder and chairman Brian Dear told me.

If you’ve used Eventful’s website before, you’ll be familiar with its application. You can easily track any event to come back to later, or if you’re already sure you want to go, you have the option to buy tickets. Eventful offers you a variety of purchasing options based on who is selling tickets. For example, on a Bill Maher comedy show page I see the option to get tickets through Ticketmaster, StubHub or Gigaticket. Clicking on any of these will load up the webpage for these sites with the event ready to be purchased. 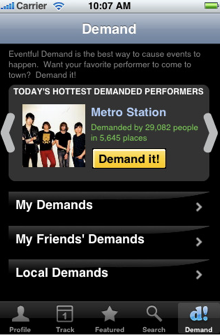 The application is more than simply an event finder, though. Dear explained that the service’s most popular feature is Eventful Demand, and it too exists in the new iPhone application. Demand lets you track down a favorite performer, be it musician, author or political figure and literally demand that they come to your city with the click of a button. Many musical artists (or at least their managers) are actually watching this, according to Dear, and will change or schedule tour dates according to the information that comes in.

Dear also noted that all of this year’s presidential candidates had used Eventful Demand at one point or another during the election process thus far. This helped their campaigns determine where to make stops. Not surprisingly, he noted that two web favorites, Barack Obama and Ron Paul were among the top demanded figures.

Using Demand in conjunction with the location features on the iPhone or iPod Touch lets you see who people in your city are demanding a visit from. This makes it easy for you to “pile on” as it were and hopefully get that artist or person to take the request more seriously.

The application, which is available free through Apple’s App Store, also has many social features that can help make for a better event discovery experience. For example, you can easily see what shows your friends are going to. You can also see what they are tracking and leave comments on any event.

It would be nice if you didn’t have to leave the application to buy tickets (you do this through the Safari web browser on the device) or to use the map, but that’s a minor complaint. Dear noted that there should have been integration with the iPhone’s Calendar app but that Apple neglected to have that feature for developers prior to launch. It should be coming however, so you will be able to easily add events to your device’s built-in calendar. [Update: As Dear notes in the comments below, the Calendar was not available in the SDK, but hopes it will be available soon.]

One feature that would be nice to have is a sample of a band’s music. This might be useful if you were looking for a spontaneous concert to go to. The Eventful web site sort of has this in the form of YouTube videos from various bands. 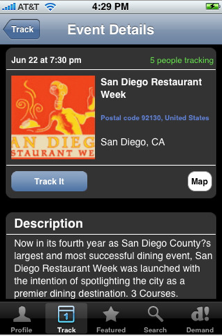 Interestingly, Dear said that 90+ percent of the application’s users thus far are male. He attributes this to the fact that many of the iPhone’s early adopters are male and expects it will equal out to something closer to a 50/50 male to female ratio over time. He also said that the application is driving traffic and interest in the actual Eventful web site — making it a “gateway drug” of sorts.

Eventful faces competition from the likes of Yahoo’s Upcoming, but Dear isn’t too worried about them because that service is only “number 1,383,000 out of 10,000,000,” for Yahoo. Eventful’s sole focus is on events, and it wants to track them all from huge concerts to everything in the long tail. Upcoming also doesn’t yet have an iPhone version.

The Eventful application currently does not have ads on it, so the only money it pulls in is from affiliate fees from the various ticket sellers. Dear says that the company will eventually include ads in the application but that it is working on some new ways to integrate the ads so that they’re useful.

The San Diego, Calif.-based Eventful has raised $10 million over two funding rounds so far. It is currently looking into raising more money, mainly to expand its sales and marketing teams.