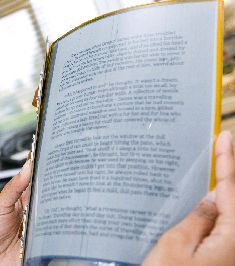 Thin, flexible display tech is one of those advances that has been just over the horizon since the Internet bubble started inflating. Remember the promises of e-paper — a crossbreed with the best qualities of both paper and computer screens, used as portable reading material? So far the best we’ve gotten is the Amazon Kindle, but Plastic Logic is hoping to change that, with a plan for commercialization next year.

Plastic Logic, spun off from Cambridge University in 2000, has been working for a long time on its technology, a semi-transparent sheet of tough plastic that can quickly create and erase static images (video is still a challenge). Electronic books, of course, are the obvious application, but there is also potential for signage, RFIDs, head-up displays (HUDs) and other gadgets.

Nowadays, the company has its headquarters in Mountain View, Calif. But more importantly, it also has a manufacturing center, in Dresden, Germany, from which location it will introduce a mass-market device incorporating a flexible display — pitting it against E-Ink, Samsung, Panasonic and several other rivals who are working in a similar time frame.

That facility is scheduled to open in September 2009 2008 [update: The company initially misreported the date; the plant is slated to open next month. We’ll have more details soon.] but the company says its product will be on the market in early 2009, which suggests that it’s probably working with another manufacturer. Who that could be presents some interesting possibilities. Because it’s just a display, the technology seems like a natural match for a device like a cellphone, which has a tiny screen but can download data such as the daily newspaper.

Polymer Vision has already installed a tiny foldable display into a phone called the Readius, which is slated for release in Europe this year. A larger screen could potentially be a smart add-on for a cutting-edge phone like Nokia’s N95 or the iPhone. (Interestingly enough, Steve Jobs hinted earlier this year that an Apple reader of some sort might be on its way.)

In the meantime, if you can’t bear holding out another year for a flexible display, you only have to wait until October, when the 75th anniversary issue of Esquire will have a blinking e-paper display made by E-Ink incorporated into its cover as an elaborate publicity stunt.

The $50 million funding for Plastic Logic was led by existing investors Oak Investment Partners and Amadeus Capital Partners, with participation from Intel Capital, Morningside Technology Ventures and others (a full list is here). The company has taken over $200 million to date.
[youtube=http://www.youtube.com/watch?v=0znv3V-GsNk&w=425&h=344]