Incubator Y Combinator just wrapped the first of its two West Coast demo days for its latest batch of startups. As usual, their concepts were all over the place, from ticket sales to retail polls to job listings.

The startups gave demos on the East Coast last week (Y Combinator’s summer session is held in Boston), and there has already been some debate about whether there were any “winners.” One grumpy attendee reportedly told Silicon Alley Insider he was unimpressed by the entire lineup, although other commenters (including Y Combinator founder Paul Graham) begged to differ.

As for me, well, I have to admit I found the lineup less exciting than the companies that demoed in March. Most of the products seemed solid, but from a conceptual perspective, I just wasn’t as jazzed about them. A lot of the startups seemed to be “like FILL-IN-THE-BLANK-COMPANY, but easier,” which may make sense as a business model, but makes it harder to pick winners without actually trying the service.

Still, there were a handful that jumped out at me as particularly promising, or at least fun and interesting. Here are the five that made the best first impression, in order of preference:

1. CO2Stats — Dubbing itself as “the VeriSign of sustainability,” the company offers a way for websites to certify that they are environmentally friendly for a monthly fee. CO2Stats analyzes the energy footprint of your website (which is a really cool tool in and of itself), then purchases an equivalent amount of renewable energy to offset your usage. You can then place a button your page attesting to your site’s environmental friendliness. The company says it already serves 2,700 customers (including IBM) in 25 countries.

2. Posterous — A service that makes it easy to blog by email or text message. Users just send the text, photos, audio, video or other attachments to post@posterous.com, and Posterous publishes a blog for you. You don’t even have to create an account. Posterous integrates with blogging services like WordPress and Movable Type, and also with social sites like micro-messaging service Twitter and photo-sharing site Flickr. 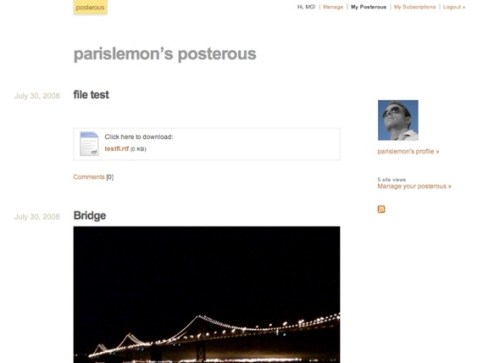 3. Slinkset — A service that lets you create a branded, customizable site where users can vote content “up” or “down”. One of the obvious applications is the creation of social news sites (“Reddits for the masses”) but Slinkset can be used for any content you want. Similar services include IdeaScale and UserVoice. What I like about Slinkset is how fast and easy it looks to use — the founders threw up a branded polling site in two minutes during their onstage demo.

4. Job Alchemist — A job listing startup that combines two different services — niche listing sites and an ad network for job listings. Neither idea is all that novel, but Job Alchemist seems to be have a solid offering on both sides. Startuply, the first of its niche sites (it focuses on startup jobs, of course) has already launched. The listings network — which will be called JobSyndicate, will pay a healthy reward for filled jobs and will give advertisers and publishers full control over which ads get placed on which sites — should launch in September.

5. Popcuts — An online music store that gives shoppers a slice of future revenues from sales on songs they purchase — and the sooner you purchase a song, the bigger your share. Popcuts basically turns the hipster instinct to find cool bands first and turns it into a business. The model is a bit convoluted and the selection limited, so it won’t pull me away from Amazon anytime soon, but the founders say a local band called My First Earthquake actually sold more copies of their new album on Popcuts than in iTunes, Amazon or any other online store.

Here are the other companies that demoed today, unordered. (There were also a number stealth companies that I’m not supposed to write about, some of whom were as promising as any in my top five.)

TicketStumbler — A Kayak for sports tickets, which aggregates listings from around the web.

People and Pages — A Google Groups/Google Sites competitor that uses a simple interface to combine email lists with websites creation and editing.

Anyvite — A self-described “Evite-killer” that wants to make the event organization and invitation process easier, therefore listing events that are too small to bother listing on Evite.

Meetcast — A web conference service that wants to bridge the gap between expensive business solutions like WebEx and free-but-limited services like Tokbox.

Picwing — A digital photo frame that makes it easy to sync your online photo albums with the frame.

Snipd — A service that makes it easy for users to share images, videos and text online, and for publishers to see what content is most popular — not just frequently-shared articles, for example, but also “hot zones” in the articles that seem particularly popular.

ididwork — A sharable work log that makes it easier to track an employee’s performance and give them feedback over time.

BackType — A search engine for comments that also allows users to create accounts linking all their comments across the web.

Poll Everywhere — A mobile voting startup that focuses on meetings, conferences and other live events.