In the wake of EDF Ventures‘ subpoena demanding information about one of its critics on controversial VC-rating site TheFunded, more scathing commentary about the Ann Arbor, Michigan firm has come to light. For example, the commenter targeted by EDF says the firm has “very harsh deal terms.” But does that criticism hold any water? Not really, according to the analysts at VC Experts, who examined four of EDF’s recent deals and found “nothing too out of the ordinary or harsh.”

VC Experts looked at anti-tampering company Arxan Technologies‘ $15 million third round, medical device company ValenTx’s $6 million first round, Xtera Communications‘ $52 million second round and Biosurface Engineering Technologies’ third round. They used a proprietary algorithm called the “cost of capital benchmark,” which ranks deals on a scale from “fully company friendly” to “fully investor friendly.” It turns out the deals were all over the place: Arxan’s deal was rated much more investor friendly than the industry standard, ValenTx’s was rated much more company friendly and the other two deals were in between. 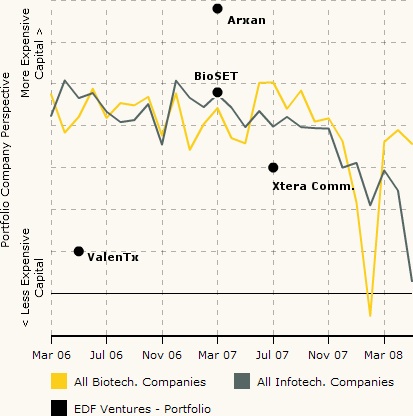 All the data really shows is that some startups got good deals and some didn’t — it’s hard to draw conclusions about EDF’s 26-company portfolio from four deals alone. But it’s worth reemphasizing VC Experts’ point that there was nothing out of the ordinary.

And the range certainly illustrates one of the problems with taking comments on TheFunded (which has a business relationship with VentureBeat) at face value. Not only could those comments come from someone with a grudge, they also reflect a limited perspective. The chief executive of Arxan, for example, might have a very different take than someone at ValenTx. (Although there are signs that TheFunded commenter in question isn’t an entrepeneur at all.)

Update: TheFunded points out some of the shortcomings in the analysts’ “cost of capital benchmark” in the comments section below.