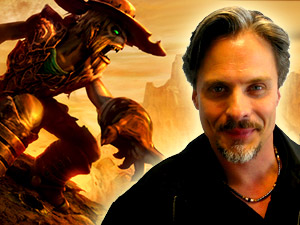 Lorne Lanning has had a wide-ranging artistic career: He’s a classically trained canvas artist. He’s been a voice actor. He co-founded video game firm Oddworld Inhabitants and made four Oddworld games before shutting the studio in 2005. Lately, he’s been working on a new digital entertainment business.

He will be one of the speakers at Nvidia’s Nvision 08 this week in San Jose, where he will expound upon digital art. Lanning says digital art will become a much bigger business and become a viable career for budding young professional artists.

VB: You started your career as a painter in New York.

LL: I was painting. I had an art factory with artists. We got ten paintings done every eight weeks. We were preselling them for $50,000 each. That was the real art market. Some people were selling paintings for $500,000 each. When I moved to California, I got into the digital animation and then video game business. 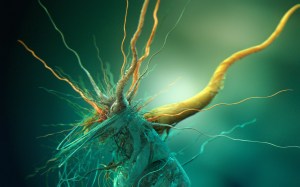 VB: Do you think digital art (like the piece pictured left) can cross from the niche to the mainstream?

LL: You can’t sell it for that much. It’s hitting the mainstream, but in the form of screen savers and desktop art. But that could change. When people buy 120-inch TVs for their homes, they will want to do something with those screens. They’re not just for watching movies. They can display art. You can stick a memory card in there and start showing slide shows of art. This visual real estate will become much more than a motion picture machine. It will be an extension of your environment. That means there will be new business models emerging for digital animators and digital still-frame artists.

VB: What is different about digital art?

LL: I’m excited about what computing is doing to enhance one of our greatest natural resources, which is our artistic community. We have a stigma that digital art might not be perceived as real art. That’s an absurd assumption in the first place. But let’s ignore that conversation about ignorance for now. What’s happening with visual computing for artists is that it is making things possible that couldn’t be done before. Traditionally with oil painting, the chances are you spent an enormous amount of time on that. The art is not appreciated for the intent of the artist, but more for the pain and perseverance and craftsmanship of it. These sadists believe artists should doodle everything on the canvas. But sometimes the artist’s message is far more important than anything he brings with his craft. That message is what’s potent, whether it’s a novel or journalism or animation. If we hold the idea that the artist should be painting all that detail, then an artist can paint no more than 200 paintings in a lifetime. We’ve learned that excellence comes through iteration in art. You have to do a lot of art before you do something great. With digital art, I can infinitely experiment. With experimentation comes growth. The medium of the oil painting becomes a hindrance to artistic growth. 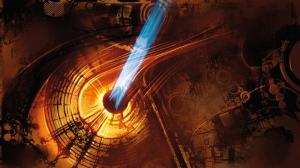 VB: So you can see this faster evolution in computer-generated art?

LL: We’ve got this new computing power that lets us use game engines (the tools used to make and display games) to make feature-class animated movies and art. That’s giving us more creative and business opportunities. When we have a medium that allows the artist to iterate faster and faster, now we see artists learn in one decade – someone like Andrew Jones, a founder of game developer Massive Black (art pictured left) – has a great body of work. He’s part of the generation that grew up with computing. For him, to not use a computer for art is absurd. The learning curve and evolution is accelerated. We are seeing an evolution of artists that we haven’t seen before in human history. These people are just getting started with self-discovery. They aren’t bound by the medium. The artists can get smarter. The medium can keep up with them.

LL: It’s 30 years at the most. It really got going in the mid-1980s. Now people know what CG means. It has permeated our culture. People thought it was a fad. Now it’s part of the vernacular. Video games are hugely responsible for it. 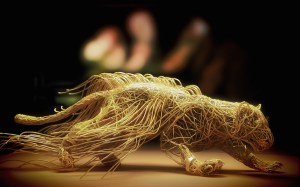 VB: There are a lot of components to digital art. There are games. There are special effects in movies, the Pixar films, and the still art. How far has it come?

LL: In 1990, we were designing a paint system for feature-film resolution. I was doing paintings with this. I was trained as a traditional, photorealist painter. Back then, you didn’t bump into people who knew how to paint and knew computers. I did some prehistoric ocean paintings. It was 7,000 lines of resolution with a mouse on a Silicon Graphics computer. The techniques are same as what I would have done on an eight-foot canvas. No one knew how to print these things out on fine-art paper that was acid free. I couldn’t get them printed out on museum-quality paper. We could not match the colors on the print to what I did on the computer. Now, there’s a guy who can sell versions of his paintings maybe half a million dollars. I couldn’t even print mine out. But the work was the same. Maybe now I could sell paper poster versions of my digital art for $70,000 worth, maximum. It’s a perception difference. With still art, we haven’t even tapped the potential of still art.

VB: Can you really sell and view digital art the same way as traditional art?

LL: It’s crazy. If we had 100,000 lines of resolution, I could go around it with a magnifying glass and find fully rendered characters on a 12-foot canvas. We can print 12 feet high and 100-plus feet long. There are printers in Japan that can do that. Digital art has not found its value yet because of the notion that it must be done by hand. The question isn’t whether it’s the original. It’s more like whether this is the only one. Are there more like it? We’ve devised a DNA encrypting technique to determine that. The DNA would be blended into the inks. And we can have a signature that says the original data has been erased from the hard disk. I can buy a 12-foot canvas and be assured it’s the only one. That could bring up the value of digital art where it should be. We wanted to create a standards process that any artist could register their work with and get a printout that they would approve. It could be the only copy of a certain scale to be sold. 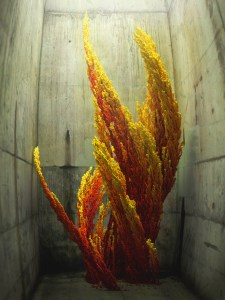 VB: Besides authentication, what is holding digital art back?

LL: We have to ask what this technology offers. When we look at the reality of the business landscape, the business opportunities are getting worse. Contractually, if an artist has to take a full-time job now, it is a standard practice that the employer owns everything you create in and out of work. Today, there are a half million artists in training now. There are more people in game production than there are in film production. The problem now is artists are signing away their ability to do fine art because they need jobs. The digital artists are finding there is no value put on their art. We’ll need a digital artists’ guild to protect artists’ rights. Just like with the movies. These are road blocks to digital art becoming a viable profession. On top of that, this profession needs a temple. A museum. It needs to overcome resistance to the idea it isn’t art. Nvidia sponsors teams of tournament gamers. I think you might see these companies sponsoring digital artists the way that Nike sponsors individual athletes.

VB: How did you get involved with Nvision 08?

LL: Nvidia approached the CG Society (digital animators and artists group) on ways they could work together. They were interested in the digital art frontier. Really interesting things are happening. In some respects, outside of Hollywood, how often do we have the head of a really progressive, bad-ass chip manufacturing company authentically interested in interfacing with a group of artists? Nvidia reached out to the creative community. They asked how they can facilitate what the creative community wants to do. That was just before their NvArt exhibition at the Museum of Modern Art. They did a show with abstract art from the digital art community. The winner was an obscure person from an Eastern European country. That really excites me.

VB: Do you think that digital art will get its revolutionary spark?

LL: Absolutely. Nvidia is encouraging the notion that the digital arts should have more support. For that reason, I’m thrilled at the tools they have delivered in the graphics chips but also that they’re recognizing that this new art form isn’t being recognized as it should be. They start getting behind it and putting digital art into museums, they can move us past the perception problems and road blocks. If a market can get creative, it will bloom. A kid in Ghana can become an internationally recognized artist.

Mike Capps, president of Epic Games, on teaming up with Electronic Arts

Simon Jeffery, president of Sega of America, on iPhone games and more

David Scott Lewis, the inspiration behind the hacker in “War Games,” on the early days of hacking