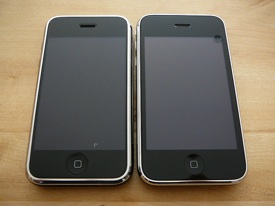 It’s amazing what you can do when you have much of the world at your disposal rather than just the United States and a small collection of countries in Europe. Apple’s iPhone 3G is set to surpass the sales of the first generation iPhone some time very soon — if it hasn’t already, reports TechCrunch.

The iPhone 3G will hit sales of 6 million units some time next week. That is amazing considering it took the original iPhone nearly a year to reach that same mark. The latest iPhone when on sale on July 11, meaning it will beat the previous iteration’s sales mark in as little as seven weeks!

Of course, as I alluded to, the original iPhone was basically only on sale in the United States for much of that time before expanding to select counties in Europe. This time around, the 3G version launched in over 20 countries and has already added over 20 more.

India, the second most populated country in the world just got the device (though it may be prohibitively expensive there) and Russia will gain it this fall. You can probably expect that the most populous country, China, will be just around the corner as well. In all, Apple claimed at its WWDC event this year that it plans to have the device in 70 countries by the end of this year.

Multiple reports yesterday suggested some of the woes that people are having with the device may be more related to various cellular networks than to Apple’s hardware or software. AT&T and Apple sent a text message out last week to let all customers know to download the new 2.0.2 iPhone software to correct some connection issues in the United States.

The next big iPhone software update, 2.1, could launch as soon as September.