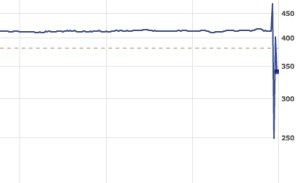 Heading into a battle with Cisco and others, Google is launching a YouTube-like video service for businesses.

Dubbed Google Video for Business, the service makes it easy for large businesses to tap into everything from camera phones to handheld video cameras and upload video to a corporate network. The videos can be standard YouTube-style quality or higher quality video as well.

Glotzbach said the time is ripe because video production has reached the masses, with video technology in the hands of everyone from small outfits to large corporations. Companies can use it for executive messages, trip reports, or training. Google is using a new brand — instead of YouTube, which Google owns — since the YouTube brand isn’t viewed as business ready. Historically, business video has been expensive and complex.

Google Video for Business will be tightly integrated with Google Apps. You will be able to insert secure videos into your Google Apps, whether it’s in the middle of an email or presentations or a spreadsheet. The business will tap Google’s YouTube infrastructure for video conversion, streaming, uploading and security. To share a video, you simply type the email address into a field. You can embed videos in an enterprise web page. You can rate or tag videos easily so people can find it through searches.

The Google Video for Business will be sold as part of the premier edition of Google Apps, which costs $50 per user per year. An education version will be available on Sept. 8 for free until March 9, 2009. After that, it will cost $10 per user per year. Google Apps is being used by 500,000 businesses, with 3,000 signing up every day. It has more than 10 million active users, hundreds of thousands of whom pay for the premier edition.

The service will compete with other video services such as Cisco, which recently introduced Enterprise TV. It will also compete with Brightcove, which focuses on video for the media industry. But it won’t really go head to head with Fliqz, which allows small businesses to make their own custom videos. Google Video for Business will mainly focus on sharing video, not actually creating it. Veodia is another rival.

“This is a bottom up thing,” said Ted Schadler, an analyst at Forrester Research. “There’s no employee-driven video market today, but lots of use cases. Training video, sales force pro talks, field service repair videos, meet the team videos and others.”

Sales teams and field service representatives are the likely early adopters, he said. Here is a video of a demo of Google Video for Business.