The young but growing world of social networking games is getting increasingly sophisticated — and on MySpace, not just Facebook. Offerpal Media, a company that provides ad-supported incentives for gaming applications, is launching a “managed offer platform” for MySpace. It’s an advertising software application that allows other app developers to easily integrate Offerpal ads-incentives into their games.

Offerpal says that its third-party developers on MySpace “earning on average $75 per day for every 1,000 daily active users, with high-engagement apps raking in more than $200 per day per 1,000 DAUs.” These numbers are similar to what it sees on Facebook. The company already provides ads for top MySpace games including Own Your Friends!, Mobsters (screenshot of its Offerpal incentives, below), Super Pets, Heroes, Speed Racing and others. 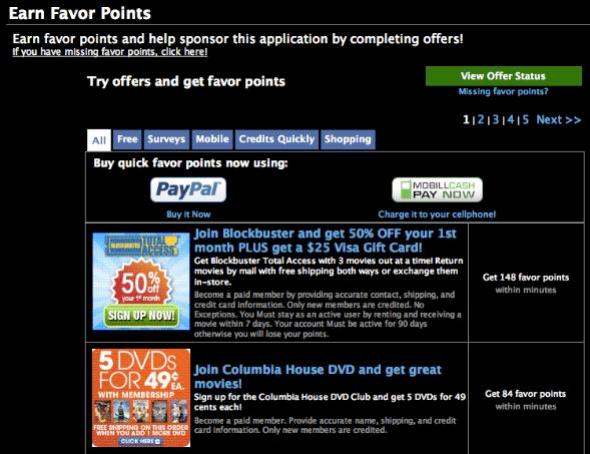 Meanwhile, rival Super Rewards says that “assuming all of a developer’s traffic [on Facebook] is US traffic, the developer could see up to $83 per day per thousand DAUs,” using its service. But, Super Rewards also says, “on an average basis across all geographies, we are about half that number.” Super Rewards counts the Facebook application Mob Wars, a company that may be making more than a million dollars a month, as one of its clients; others include applications owned by Zynga, likeTexas HoldEm Poker and YoVille.

Both companies let users earn points, rewards and other types of virtual currency within games, through taking surveys, using an advertiser discount on a real-world purchase, or trying out a new product. Offerpal claims to target more than a thousand ad offers to individuals, through analyzing their behavior, relevance to other friends a social network, and through a proprietary targeting algorithm. We’ve mentioned both companies in our previous coverage of third-party developers who are making money on social networking game applications.

Facebook and MySpace both have more than 100 million monthly active users in the world, but most of MySpace’s are in the U.S., the largest ad market in the world. So making monetization easier for app developers on MySpace is a good move for Offerpal.

And, the fact that Offerpal gets higher monetizaiton numbers on Facebook suggests it is doing something better, overall. Yet, the companies provided the above numbers — and anyway, there are lots of other factors, like the quality of a game application running these incentives — so I’m not jumping to conclusions about who’s best.

What are ad-based incentives worth, long-term?

Unlike the straightforward virtual gift purchases that Facebook may make more than $40 million on this year, larger issues loom for the ad-based incentive model. Advertisers tried out “lead generation” services offered by companies like Gratis, where users were promised things like a “free iPod!” in exchange for filling out a survey that included personal information. Ad-focused blogger Andrew Chen recently took a closer look at that history and concluded:

Ultimately, these leads [from Gratis and others] weren’t of terribly high quality, tricked the user, and a bunch of other bad things. So that industry has slowly transitioned itself out as a result. The question is, are incentivized leads from Facebook any different? How will the quality compare to the now low-value leads generated from companies like Gratis? I suppose it will not take long to find out.

So I asked Offerpal what they were doing to keep their ads worthwhile for developers. Here’s company representative Matt McAllister’s response:

– Working with our app partners on the game mechanics. Changing exchange rates, inflation rates, offering different levels and incentives…there’s a lot the developers can do to keep their users interested and engaged. (I just wrote a blog post related to this, last week.)

– Optimizing the offer mix: this is done both automatically and manually to optimize for both lead quality and offer conversion. We have sophisticated algorithms in place to make sure that repeat users are presented with interesting and relevant ads.

– Increasing the number of offers in the system: we currently have over 1,000 offers and use our optimization technology to serve up the most targeted and relevant ads; with that many, it would take a long time for any single user to burnout.

– Leveraging the cyclical nature of apps themselves: apps come and go. We’ve found that users burnout on the apps themselves long before they burn out on our offers; then they’re off to the next app, where they need more points and are willing to fill out more offers. In other words, they’re motivation to take offers never ends.

– Sheer volume: there are 200 million users on social networks. For Chen to imply that these users will burnout on leadgen offers is akin to implying that the entire web will burnout on them.

In sum, there isn’t much data on social game monetization. When app developers do talk, their own results are as mixed as, well, the quality of their applications. But this is the beginning of the social network monetization game, not the end. Time, as Chen said, will show where money can be sustainably made, and where it can’t.