Amazon‘s new online streaming video service, Video on Demand, isn’t going to win any awards for creative branding. Then again, to have a service with such a straightforward name replace one that had anything but, Unbox, may be a good thing. Most importantly, Video on Demand is a compelling alternative to the iTunes video store.

While Amazon Unbox offered movie purchases and rentals, it was PC-only initially before eventually moving on to TiVo personal video recording boxes as well. It had a limited market. Video on Demand now works with both PC and Macs and reaches into your living room by way of TiVo or a number of Microsoft Windows Media Center extender boxes — including the Xbox 360 gaming console.

Those two bridges to the living room give Video on Demand access to potentially millions of television sets — more than enough to compete with the Apple TV, Apple’s digital video box that connects to televisions. Video on Demand also has an important trump card over Apple: NBC content.

NBC pulled its content off of iTunes in late 2007, and despite some rumors of reconciliation, it has not come back yet. Part of the reason is that NBC’s own online video venture with Fox, Hulu, has become a big success. While Video on Demand and Hulu will have much of the same television content, each takes different approaches to the presentation. Video on Demand offers commercial-free television episodes for purchase at $1.99 an episode (or less if you buy a season pass), while Hulu offers commercial-backed episodes for free.

I haven’t found Hulu’s ads to be too annoying — certainly not enough to outweigh the benefit of free. But with Hulu there’s no way to get the content on a television set unless you hook your computer directly into it. That gives users a clear incentive to use Amazon’s service.

Apple could be ready to respond as soon as Tuesday on the television front, when it’s rumored Apple will start offering television shows in high definition (HD). That’s a very nice feature, but if Apple has persuaded NBC to come back in the fold, that would set up a real rivalry between itself and this new Video on Demand service.

Prices are largely the same on both, not only for television content, but for movies as well. Movie purchases on Video on Demand range from $7.99 to $14.99, while movie rentals range from $2.99 to $3.99. The libraries for rentals look to be about the same. Certain rentals are available the day they launch on DVD depending on if the studio behind them has allowed for it, while others are only available for purchase at first.

Amazon also has a back catalog of some 40,000 films for purchase and/or rent, as NewTeeVee points out. 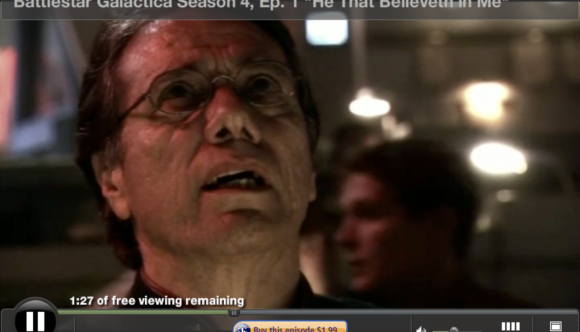 The online player itself (above) is pretty nice — at least in full screen mode. In windowed mode there is entirely too much else going on Amazon’s site to distract your eye. Video quality seems good, roughly what you get with Hulu.

Just as AmazonMP3 is now a compelling (if not superior in some regards) rival to Apple’s iTunes music store, Video on Demand is a legitimate rival to the iTunes movie store. Amazon is nowhere near Apple in terms of usability of its store, but at the end of the day selection will be the key factor, and with NBC content and tens of thousands of new and catalogue movies, Video on Demand cannot be overlooked.

The digital living room box Roku, which currently streams Netflix movies, is thought to be seeking other content partnerships. Certainly, Video on Demand would be a good fit to offer the new movies that Netflix doesn’t allow users to stream.